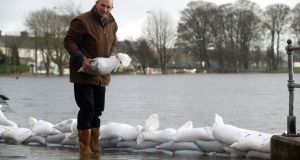 “The Shannon floods by stealth. It can be a week before the bulk of the rainfall comes down this far,” says Michael “Viking Mike” McDonnell, who runs boat tours on the river. So no great drama, no flash floods, just an eerie suspense as locals cast an eye on the mighty river flowing through the heart of the town, gaining speed, lapping over the quayside, seeping inexorably into cellars. “The higher it comes, the faster it goes. It’s surely doing eight knots now.”

Timmy Donovan, owner of Sean’s Bar, the oldest pub in Ireland, is working around the clock, pumping water out of the back yard and the holding tanks. His beer gardens lead down to the river and his mind, like everyone else’s, is on the volumes of water still far upriver, gathering strength and surging towards the Shannon. “The rainfall is only filtering into Lough Ree, then it takes about two days to get here.” He carries on covering the ancient ceiling with great branches of Christmas greenery.

Across the street, the water is seeping through the walls into the cellar below The Castle Inn. The owner, John McDermott, placed the chillers high on crates but by yesterday morning, the water had risen to within a couple of inches of them. “The Shannon takes its course,” he says stoically.

In the Slice of Life cafe, local Fine Gael TD Gabrielle McFadden repeats what is almost the town’s homage to the power of nature. “The water is going to find its own way,” she says. “Sandbags won’t keep it out, neither will pumps. All you’re doing is buying time, to allow levels to drop. The next two days are really critical”.

Cafe owner Elaine Allen hands her a bag of Bakewell tarts to bring to a terrified local woman. “They’re all our neighbours,” says Allen.

The fear is palpable. Two questions are on everyone’s lips. Is the river still rising? Yes, it is. How does it compare to the horror of 2009? Or the catastrophic 1954? It doesn’t compare to either – yet. “It’s 1861,” says Donal Boland, underwater archaeologist and longtime resident of the James and Mary, a river boat named after his parents. “What’s wrong is that the rate of rise is faster than any we’ve experienced before.” It has been rising for weeks, he says.

“In the next few days, the Shannon is a basin that’s going to get a bit fuller. It’s going to be spread out.”

He considers the question for a moment. “Land people and water people think differently. A land person sees the river as a threat coming at him – ‘it shouldn’t be doing that’. For me, it just means it’s getting bigger.”

Our problem as land people is that we have no clue about water. “Most of Ireland is totally ignorant about a big drain that’s running through the middle and everything rushes into it.”

All those rivers in its mighty catchment area, such as the Inny, the Brosna and the Suck, with all those thousands of tons of water flowing into it.

“The big problem is retention. It’s all the fault of the farmers. Look at the land drainage. We had loads of wetlands and bottom lands and all that kind of land that retained water that was put into production. So the timescale between rain falling and hitting the river is reduced.”

It’s not only the farmers, of course. McDonnell recalls when houses were under construction in the town and a man predicted the area would flood because he remembered being able to “ski on the ice” there. McDonnell too is baffled that land people are baffled. “The Shannon drains two-thirds of Ireland. If it rains in County Meath, it goes into the Shannon. People don’t realise that.”

He puts the problem down to the topography and the gradient. “There is no gradient. The water just spreads out. The only solution is to dredge the river below Athlone lock and Meelick lock”.

Dick O’Brien, a farmer, was a boy when the flood of 1954 wrought destruction on such a scale that many homeowners around the Callows on the edge of town had to be relocated and the roads raised by 3ft or 4ft. Even now, some houses are almost marooned. As his Jeep negotiates roads turned into rivers, the water height is rising to the top of 5ft field gates. At this point, we are more than half a mile from the river bank. He too has a theory. “You can’t stop it. The difficulty is down in Shannon Harbour. The channel isn’t capable of taking it.”

Nobody is talking about draining the Shannon, he says, but remedial works that would reduce water levels by about 2ft would be a solution to summer flooding at least.

Meanwhile, huge plastic-wrapped hay bales are floating around like corks while a pair of swans swims serenely alongside.

A couple of local gardaí circle the area in a 4X4 to ensure people are safe. They are armed with numbers of farmers with tractors, should they be needed.

“People are traumatised,” says Gabrielle McFadden. “But the volunteerism is amazing.”

The Slice of Life has offered pizza and soup for volunteers. Kennedy’s garage has given free diesel to operate a pump. McFadden and local councillors get stuck in packing the sandbags.

Several people mention the long-awaited CFRAMS (Catchment Flood Risk Assessment and Management Study) report, due to be published next year, which promises to offer big picture, joined-up solutions to around 300 flood-prone areas all over Ireland.

Will they be the right works?

“The people making decisions about the river should be people who know the river”, says Donal Boland firmly.