Irish litter survey results: How clean is your town? 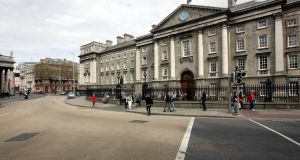 College Green in Dublin city centre. This year the city was considered to be clean to European norms for the first time since the Ibal rankings began. Photograph: Eric Luke

Dublin city had its “best ever showing” in the latest Irish Business Against Litter (Ibal) national litter survey due to the 1916 centenary clean-up operation, while Farranree in Cork was Ireland’s litter blackspot.

The country’s main cities had contrasting fortunes in the first-round results from the survey for 2016 with Galway drawing censure for its moderately littered status, while Kilkenny was given the title of Ireland’s cleanest town or city with Waterford not far behind.

Particular praise was reserved for Dublin city centre which was considered to be clean to European norms for the first time since the rankings began.

“Dublin City Council has done a fine job in presenting the capital at its best in what was an important summer for tourism,” said Conor Horgan of Ibal. “This job was complemented by the roads around Dublin Airport being exceptionally clean.”

The status of Ballymun and Dublin’s north inner city as littered detracted from the capital’s achievement somewhat, while Cork and Limerick produced mixed performances.

Both cities were considered to be clean to European norms, but the Farranree area of Cork remained in last place out of 40 surveyed, and its performance was only marginally bettered by Galvone in Limerick city which was deemed to be seriously littered.

Established in 1996, Ibal is an alliance of businesses including hotels, food and drinks producers and the Irish Tree Centre whose aim is to rid Ireland of the “scourge” of litter.

The most common types of litter encountered by inspectors were sweet wrappers, fast-food wrappers, cigarette butts and chewing gum.

Mr Horgan says the rankings demonstrate that litter is a symptom of social neglect, with disadvantaged urban areas typically occupying lower places on the list. “While our city centres are generally well maintained, disadvantaged areas continue to be the source of much of the litter in our country. This underlines the need to ensure that the 50,000 new homes planned by 2021 are built as communities, with mixed incomes, proper infrastructure and most of all are places that people have pride in – good for communities and good for business,” he said.