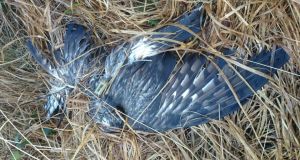 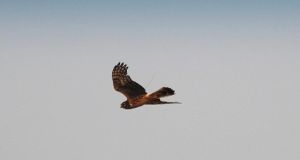 A file image of the hen harrier after it was tagged as part of the National Parks and Wildlife Service tracking programme. Photograph: Department of Arts, Heritage and the Gaeltacht

An investigation has begun after a young hen harrier was shot dead in Co Kerry.

The rare female bird of prey was being followed by thousands of people online as part of a satellite tracking project run by the National Parks and Wildlife Service (NPWS) and a local community group, IRD Duhallow.

Hen harriers are listed as a protected species and it is an offence under the Wildlife Act to kill the bird.

The NPWS started an investigation into the killing and local gardaí have been informed.

Dr Barry Donoghue of the NPWS said thousands of people had followed the bird’s progress from Kerry to the Wicklow mountains through a satellite tracking programme.

“The tracking system showed that the bird visited Meath, Louth, Monaghan and Armagh and rested by the shores of Lough Neagh, before making a long distance journey all the way to the Atlantic cliffs of south county Cork,” he said.

“The bird stayed there for most of her first winter with a number of other harriers. From these older birds, she would have learned of good hunting places and safe places to spend each night.”

The bird returned to the site where she was born in south Kerry in late 2014.

“It seems likely that she might have returned to breed there this summer, but unfortunately her life has been cut short,” said Dr Donoghue.

“The deliberate killing of a protected species, such as the hen harrier, is a serious offence under the Wildlife Act.”

Since the 1970s, the number of these rare birds in Ireland has declined due to the repossession of grassland areas for agriculture and the maturing of large-scale forestry planted in the 1950s.

Penalties for killing hen harrier include fines and/or imprisonment.