‘I quit my horrible office job to work with nature’ 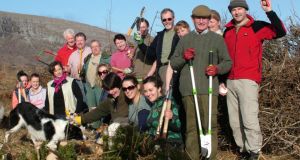 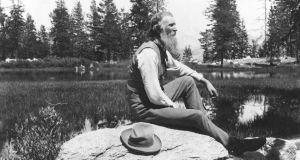 ‘There’s nothing quite like the feeling of satisfaction from clearing litter along a stretch of coastline,” says Anne Mullen. “Everyone feels really amazing after collecting a ton of rubbish from the beach. The main buzz is from doing something useful, but it’s good fun too.”

Mullen is one of about 300 conservation volunteers with Burrenbeo Trust, the landscape charity based in Co Clare. For the past five years she has joined groups to rebuild drystone walls on farmland in the Burren and to clear scrub – hazel, blackthorn and bramble – to enhance breeding sites for the marsh fritillary butterfly.

“My experience in conservation volunteering inspired me to quit my horrible office job, go back to college and find work in an area I’m interested in,” says Mullen, who now works for the Burren Farming for Conservation Programme.

Richard Morrison, a retired London financier, came to the Burren with his wife seven years ago, with plans to spend about six months there. “I had been involved in volunteering projects in London, and we were interested in discovering the Burren, and we’re still here,” he says.

“It’s more about a mindset than a skill set, because there are a variety of tasks on each project,” he says. “You just need to be willing to give up your time and be interested in learning. You don’t need to be particularly strong.”

Mullen says that her attraction to conservation volunteering is also about getting close to nature. “I learn about different plants, and I love watching them grow and seeing tiny details, like how some plants have seeds that are spring-loaded and ready to pop out when they are ready.”

Drystone walling is one of the conservation volunteering projects that has captured Morrison’s imagination.

“It’s a bit like kneading a loaf of bread,” he says. “You just have to learn how to pick up a stone and put it in the right place on the wall, before picking up another stone. In the beginning we had stonemasons teaching and helping us, but now we take on the task ourselves.”

Elaine Williams has organised the event. “It’s about bringing people together to share knowledge, but it’s also about seeing the health benefits of volunteering outdoors,” she says.

Topics today include responsible tourism, archaeology, and measuring nature’s impact on health. Participating organisations include the Vincent Wildlife Trust, Birdwatch Ireland, Leave No Trace Ireland and the Ecopsychology and Ecotherapy Association of Ireland.

Stuart Brooks, chief executive of the John Muir Trust and chairman of the UK committee of the International Union for Conservation of Nature, is the keynote speaker.

John Muir was a 19th-century naturalist who became a founding father of the national-parks movement across the world, particularly in the US, to where he emigrated with his family as a child. The trust, which is based in Muir’s native Scotland, campaigns to protect wild places, repairs mountain paths, plants native trees, controls invasive species and organises beach clean-ups. As an owner of tracts of land in Scotland, it is also involved in rewilding habitats, managing deer and monitoring biodiversity.

The trust has a wide range of conservation-volunteering opportunities, which generate about £1 million worth of work each year.

“Conservation volunteering has a long history, and one of its main foundation stones is in environmental nongovernmental organisations,” says Brooks. International organisations such as Friends of the Earth and British NGOs such as the National Trust and the Royal Society for the Protection of Birds all have large memberships.

“The difference now is that many members are passive and are happy to receive newsletters, but it’s the volunteers that ground these organisations and connect them with their wider membership,” says Brooks.

Brooks stresses the importance of conservation volunteers having a connection with those living on the land and with people in more remote communities. “We have to maintain these connections with all parts of our communities. It’s not just about giving city dwellers their wild experiences.”

On a broader level, Brooks says, it’s also important for local volunteers to be involved with rewilding projects, such as the planting of native trees in remote valleys.

“We need people to experience it for themselves because we only protect what we value,” says Brooks . “The critical thing is to connect people to nature, and that journey might start with nature books and television programmes, moving on to walking in nature – and then conservation volunteering is when you are personally giving something back by protecting and restoring natural habitats.”

Mary Hawkes-Greene, founder of Burren College of Art, is one of the facilitators at the Working for Wellbeing of People and Place workshops today. The benefits of volunteering are about more than the outcome, she says. “The process itself gives people a sense of self-worth and belonging.”

She believes that conservation volunteers’ work is unlikely ever to be done by State agencies. “Volunteers who clear vegetation for archaeological digs and help rebuild stone walls on farmland are connected to the place. This work couldn’t be done in a top-down way, with budgetary constraints and bureaucratic ways. But there is a joy of being in nature with this work, which gives an appreciation of the environment in such a way that conservation follows naturally.”

Law of nature: Legislating for wellbeing

Last year a group of UK-based wildlife organisations proposed a piece of legislation, the Nature and Wellbeing Act, that would link species decline to the decline in human health and wellbeing. The campaign wants to put nature at the heart of how decisions are made about health, housing, education, economic growth and more.

Natural England, which advises the UK government about the natural environment, has found that if every household in England were given access to quality green space, an estimated £2 billion in healthcare costs could be saved.