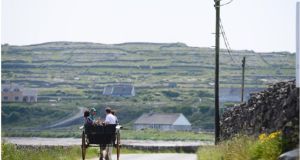 There are no issues with the water supply to the biggest of the three Aran Islands, Inis Mór. Photograph: Bryan O’Brien/The Irish Times

A massive logistical operation got under way off the west coast today to deliver water to two island communities.

Up to 240,000 litres of water is being transported daily to the Aran Islands of Inis Méain and Inis Oírr after a drought which left water supplies there at dangerously low levels.

While many parts of the country have experienced repeated downpours and localised flooding since the start of the summer, the Aran Islands have had very little rainfall and the porous limestone terrain has meant that only small amounts of rainwater have been retained there.

A cargo boat has been converted to carry massive tankers which will be filled from the mains supply at Rossaveal harbour in Connemara and ferried to the islands.

The operation will run around the clock with two crews working to ensure that the water needs of both islands – currently packed with tourists – will be met.

The vessel will carry 120 cubic metres, or 120,000 litres, of water on each trip. The current daily requirement on Inis Méain (native population less than 200) is 80 cubic metres and it is hoped to build up reserves with the excess.

Inis Oírr, physically the smallest of the Aran Islands, has a population closer to 300 and a greater requirement for water.

The first consignment from Rossaveal was due to land on the pier at Inis Méain this evening. Four tankers were lined up at the quayside and, once filled from the boat, were due to be transported by a tractor unit to the reservoir which is located some distance from the harbour.

A different approach is required for Inis Oirr. The cargo vessel will anchor close to the beach where the water will be pumped through a pipe and directly into the reservoir.

The massive operation is being undertaken by Galway County Council as agent for Irish Water and Council official Tony Kelly said it required a great deal of planning and management.

“It is an expensive project because you’re hiring boats and then you’re hiring these tankers to be retro-fitted onto the boat. When you get to the islands themselves, you’re hiring other plant machinery to move the water from the harbour to the reservoirs.

“Not only that, but then you’re laying pipe and hiring in pumps, so there’s a lot of cost to Irish Water”, Mr Kelly said.

“You’re supplying the life force to the two islands and not only the people themselves but also to the livestock. Then there is the tourism and local industry there. It’s a life-force and badly needed.

“We have the boat hired 24/7 and we have two crews working on it, so if we can maximise it by going to three trips a day we’d be doing very well,” Mr Kelly said.

The operation would continue for the foreseeable future, but it was not possible to know when the islands would be self-sufficient.

“We had problems with rationing water up to the middle of October last year, so it’s hard to say how long it can last.”