How green is my Tolka Valley?

It has long been an unsung miracle. Now this stretch of north Dublin is leading the way in biodiversity 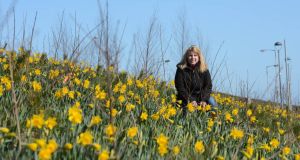 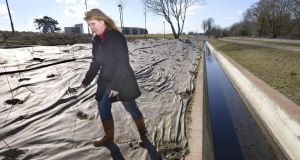 It’s a rare pleasure, when so many good developments in our society have been cruelly blighted, to witness the birth of a stretch of biodiverse parkland, right beside one of Dublin’s most troubled communities, Scribblestown.

Tolka Valley Park has long been an unsung miracle. The original section, along the river between south Finglas and Dublin Industrial Estate, is built on a landfill dump, the nightmare kind that we created before the EU put some environmental manners on us. It was never properly capped after it was closed in the 1970s. The park was made by simply slapping down a layer of topsoil.

Football pitches sagged as the dump settled. Methane still leaks from it. Rust-coloured rivulets ooze down some of its slopes even today, as long-buried iron rises to the surface. Recent willow-planting will, with luck, alleviate this problem.

Finglasswood Stream once flowed into the Tolka here, carrying all manner of domestic pollutants. The ornamental pond it fed used to bubble noxiously; fish were poisoned; overfed algae smothered other aquatic vegetation.

Then an innovative tradition began, with an ecological rather than a mechanical solution to this man-made problem.

Two wetland “cells” were constructed between the stream outflow and the pond, and planted with reeds, bulrushes, sedges and yellow irises. The plants filter most of the toxins. Today, the pond runs clear and clean, the only bubbles generated by a fountain. Wildlife flourishes.

This “integrated constructed wetland” (ICW) was the brainchild of Rory Harrington, a remarkable man whose expertise ranges from the genetics of Irish deer to the ecological engineering of landscapes. Annestown River, which runs beside his home in Co Waterford, has been similarly assisted back to health by the creation of slurry-filtering ICWs by 13 farmers in the watershed. Sea trout have returned to the river after a century’s absence.

A new ICW is also a major and attractive feature of the new extension of the Dublin park, which follows the Tolka upstream to Ashtown. This ICW’s three ponds are already graced with swans, grebes and numerous gulls. The ponds filter storm water from nearby roads, protecting the river by slowing run-off flow, and absorbing the damaging detritus carried with it.

The whole extension builds on the innovative ecological approaches in the original park. It has been managed by Maryann Harris, parks superintendent for biodiversity at Dublin City Council, and a project team, with consultancy from Atkins Global and guidance from Inland Fisheries Ireland. A greenway cycling route, funded by the National Transport Authority, links the two parts of the park.

There was much excitement when juvenile salmon were found in the river here in 2011, indicating the success of opening up a number of the Tolka’s weirs to permit the passage of migratory fish.

The challenge in the extension is to create an environment where such increasing biodiversity can prosper, all the way up from the river, through newly planted woodland walks (birch, Scots pine, alder, bird cherry and more) across a meadow to a dense new hedgerow along River Road. Seven seed mixes promise rich carpets of wildflowers in springs to come.

But the first essential is to stabilise the riverbank. Tolka derives from tulcha, the Irish for flood. The boomtime building in Dublin 15 has created vast hard surfaces that cannot absorb rain, so add to the river’s natural tendency to flood, causing erosion. Willows have therefore been extensively planted along the banks, and should, in time, bind them securely. Extra stability at this stage is provided by organic matting, developed by a Belgian EU Life project, and used here for the first time in Ireland.

The matting not only protects the banks against flooding but also should help suppress another threat to the park’s ecological health: invasive alien plants, which thrive in disturbed soil. Himalayan balsam and giant hogweed are already major problems, grabbing space from native plants.

The matting biodegrades after several years, when carefully fostered native species are well established. It has already proved happily resistant to another local problem: vandalistic burning.

“We are managing the park for people and recreation,” says Harris, “for its cultural and archaeological heritage, and for wildlife.” Balancing these goals will never be easy, especially in the sociological context represented by Scribblestown on one side of the park and the new middle-class estates on the other.

Harris points to the bridge beside the ICW, the first new one across the Tolka in many years, as a step in the right direction.

The park is likely to be formally opened during National Bike Week, in June.