How clean is your local beach? Check our nationwide list

Seven locations fail the test and are classified as ‘poor’ quality 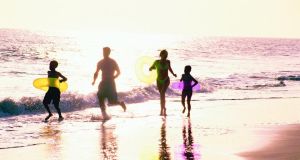 A total of 94 per cent of Irish bathing waters are meeting stricter new EU standards, the Environmental Protection Agency (EPA) has said.

“Overall, the quality of Ireland’s bathing waters continues to be very good and new standards introduced in 2014 provide a much higher level of protection for bathers,” the director of the EPA’s Office of Environmental Assessment, Dr Matt Crowe, said.

He was speaking at the publication of the agency’s report on bathing water quality in Ireland for 2014.

Dr Crowe said he was disappointed that seven bathing waters had been assessed as being of “poor” quality.

These were the front strand in Youghal in Co Cork; Ardmore in Co Waterford; Duncannon in Co Wexford; south beach in Rush, Dublin; Lilliput, Lough Ennell, Westmeath; and Clifden and Ballyloughane in Galway.

The source of pollution appeared to be mainly linked to wastewater discharges, the agency found.

In the cases of Youghal and Clifden, new sewerage works were being constructed. Mr Webster said a temporary wastewater treatment plant was proposed for Duncannon, while in Ardmore improvements to the effluent disinfection system, operated during the bathing season, were being undertaken.

In other locations, a broad range of measures aimed at identifying and tackling the main pollution sources were being implemented, he added.

Ireland’s 136 identified bathing waters now have to meet standards almost twice as strict as those which previously applied.

Three-quarters of Irish bathing waters qualified for the new classification of “excellent’’ quality.

A further 15 bathing waters, or 11 per cent, were classified as being of “good’’ quality.

A total of 10 bathing areas, some 7.4 per cent, were of “sufficient’’ quality, and remained vulnerable to episodes of pollution, which meant they were potentially at risk of being classed as “poor’’ at some stage in the future.

Mr Webster said Ireland had many superb beaches and while monitoring them all would be impractical, the EPA would like to see an increase in the number of identified bathing areas.