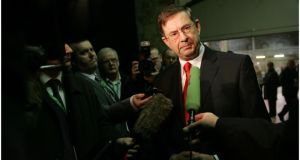 Éamon Ó Cuív told the committee the essential problem was that everybody wanted the hills to be managed and to be available for recreation, but nobody wanted to pay for this

An absence of full-time hill farmers is threatening the biodiversity of more than 30,000 hectares in Co Wicklow.

That is according to the latest report on sustainable management of the Co Wicklow hills from the Wicklow Uplands Council.

The council which includes representatives of farmers, the National Parks and Wildlife Service and those who use the hills for recreation, among others, yesterday called for action to protect livelihoods of the hill farmers.

Presenting its report to the Oireachtas Committee on Agriculture the Uplands Council said there had been a severe flight from the land among hill farmers - up to 50 percent in some areas – in the last decade.

Declan Byrne an advisor with Teagasc said changes in the sheep market had led to a demand for spring lamb and farmers found it was more profitable to take low-lying land and keep ewes and lambs there until spring. Putting pregnant ewes on the hills made for smaller and weaker lambs and farmers could not put sheep on the hills because they would lose money.

But the absence of grazing on the hills meant vegetation, particularly heather was becoming dense and was threatening biodiversity while also becoming a fire hazard, Mr Byrne said.

Uplands council member and Glenmalure hill farmer Pat Dunne said he was one of the last full time hill farmers in Co Wicklow and would not be able to continue if he had a mortgage to pay. Mr Dunne said he had two sons who were “mad keen” to continue as hill farmers but it was not possible to see how they could support themselves in addition to “a wife and family or whatever”.

According to the report more than 30,000 hectares of protected uplands some of which are EU designated Special Areas of Conservation (Sac), are in danger of environmental damage including fire and habitat destruction through undergrazing by livestock.

Éamon Ó Cuív told the committee the essential problem was that everybody wanted the hills to be managed and to be available for recreation, but nobody wanted to pay for this and it now looked as if in a few years there would be nobody living there.

Mr Dunne responded that the Uplands Council report had proposed an EU payment for farmers, “not for owning land” but for maintaining the hillsides, and this was a key recommendation in their report.

A number of TDs and senators said they believed the solution was to pay farmers an income based on the area they maintain, in a fashion similar to a scheme in place in the Burren in Co Clare. Senator Brian O’Domhnaill told the committee such a scheme might also apply to Co Donegal where there had been significant fires destroying habitat. Martin Ferris said such moves could also be condiered for Co Kerry and west Cork.