Government to try to ‘create acceptance’ on water charges 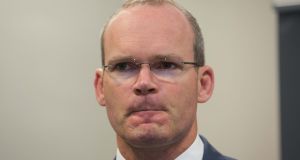 Minister for Local Government Simon Coveney: “There are lots of things we can do to create acceptance across Ireland in terms of managing and paying for water appropriately. We now have a process that is about to begin to make that happen.” File photograph: Gareth Chaney Collins

The Government will use the nine-month suspension of water charges to try to “create acceptance” among citizens as to how best to pay for water, Minister for Local Government Simon Coveney has said.

Mr Coveney, speaking at an event on Wednesday, also insisted the Government’s plan to suspend charges is legal amid allegations to the contrary from the Labour Party.

Environment commissioner Karmenu Vella said the flexibility offered to the Republic ended in 2010 when the then Fianna Fáil-led government pledged to introduce water charges.

The Water Services Bill, introduced in the Dáil on Friday, provides for the suspension of billing for water charges from July 1st for nine months while a commission is established to develop a long-term sustainable funding model for water services.

“I’m going to meet the commissioner next week,” Mr Coveney said on Wednesday. “He’s a very practical and sensible individual. He wants to help Ireland here, and I’ll be outlining to him the reason why we’re suspending water charges for nine months.

“I think we’ll get accommodation to do that once he understands why we’re doing that, which is to create a window of opportunity for Ireland to assess and debate, and get the benefit of informed opinion from experts as to how Ireland should pay for domestic water services into the future after that nine-month period.

“I’m quite comfortable that what we’re doing here is the right thing and that the commissioner will understand what we’re doing and hopefully facilitate. That will be the focus of the meeting next week.”

Mr Coveney added that the European Commission “would have difficulty” with the outright abolition of water charges.

“I know that Labour’s position has been that this is somehow illegal and not consistent with the water framework directive,” he said. “I don’t agree with that view. We know the commission’s view in terms of not having water charges at all in the future. I think they would have difficulty with that.

“But there are lots of things we can do to create acceptance across Ireland in terms of managing and paying for water appropriately. We now have a process that is about to begin to make that happen.”