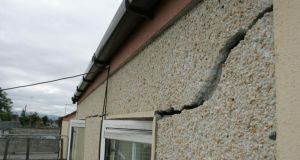 Severe cracking due to pyrite in the cement. Photograph: Frank Miller/The Irish Times

The Government has shelved a plan to levy the insurance and quarrying industries for the cost of repairing thousands of homes damaged by pyrite used in their construction.

Minister for the Environment Phil Hogan yesterday announced a €10 million fund to carry out remedial works on those houses most seriously affected by the use of the faulty building material.

Under the plan, between 850 and 1,000 homes with high-level, “red” category damage are to be repaired over the next two years. But more than 10,000 other homes categorised as having “amber” or lesser damage are currently left outside of the scheme.

The €10 million – to be boosted by additional funding next February – will come from the exchequer, Mr Hogan said, as the planned industries levy “ran into constitutional difficulties” on the basis of advice from the Attorney General.

“We were not in a position to pursue a levy on aggregates or particular categories of people,” he said.

The Minister said this decision would be reviewed once a number of legal cases involving homeowners and industry figures had gone through the courts.

The scheme will operate under the auspices of the Pyrite Resolution Board (PRB), which estimates there are up to 1,000 dwellings requiring immediate remediation due to pyritic heave caused by reactive pyrite in the hardcore under the ground floor slab. An advisory panel to the department last year reported that a further 1,000 had undergone or were undergoing repairs, while 10,300 other homes were potentially affected.

Chemical reactions
But PRB chairman John O’Connor said, “I personally think it [the total figure] will be less”. Some 700 application inquires had already been made to the board, he noted, adding the final demand was hard to quantify as “this problem does not always manifest itself on day one; it develops over time as the chemical reactions take place in the substone”.

Mr O’Connor, a former chairman of An Bord Pleanála, described the “initial” funding as a “major breakthrough” but affected homeowners were more circumspect.

Caroline Keane of the Pyrite Action Group said: “Huge volumes of homeowners potentially are going to be excluded from this scheme. They are the people who are going to pay for the failures of State and industry.”

‘Pyrite estate’
Ms Keane, whose home in Lusk, north Co Dublin cost €238,000 and is now “worth nothing”, said she qualified as having “red” category damage. But some of her neighbours would not so qualify, which would make it difficult for anyone in what’s dubbed a “pyrite estate” to sell their home or achieve market value.

While a welcome start had been made on addressing the issue, she stressed there had been a failure in planning and regulatory oversight and “it’s very disappointing the lack of leadership in standing up and acknowledging that”. As for industry bodies, “they are playing the same game: ‘We are not responsible; we are not going to pay’.”

About 12,500 homeowners complained about pyrite damage to HomeBond, the construction industry insurance scheme that has refused to pay compensation and blames the quarries instead.

Mr Hogan said discussions were continuing with HomeBond and the Construction Industry Federation to “bring them to the table”.

In particular, the PRB was looking at how they could provide technical assistance and testing of houses.

He added that the legislation to put the PRB on a statutory footing and to give effect to the remediation scheme would be enacted before the end of this year.


REPAIR PLAN: HOW IT WILL WORK
Under the scheme homeowners can apply for repairs estimated to cost up to €50,000.

Only the most severely damaged houses can qualify.

Repairs already undertaken will not be covered. “There will be no rebate. This is not a compensation fund: this is a remediation programme . . . We cannot retrospectively implement the scheme,” said Minister for the Environment Phil Hogan.

A grant of up to €3,000 is available for temporary accommodation, and €2,500 for storage while works are carried out by a contractor under the auspices of the Pyrite Resolution Board.