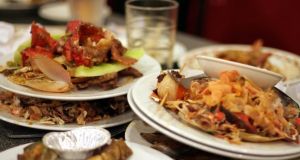 Of all our dietary foibles, the avoidance of bread heels and crusts would seem pretty innocuous. However, this trivial preference for the centre of the loaf comes at a surprisingly high price.

According to Tristram Stuart, author of Waste: Uncovering the Global Food Scandal, Marks & Spencer in the UK instructs its sandwich supplier, Hain Celestial Group, to discard four slices from every loaf it produces, the heels and the adjacent slices, for quality control reasons.

This adds up to 13,000 slices of freshly baked bread being chucked in the bin every day.

This rather stark example of waste, accounting for just one product line in one supermarket chain, illustrates the scale of the problem. It is estimated that 30 per cent of food produced for human consumption is either lost or wasted across the global food system.

The problem infects every step of the food chain; from farmers being forced to discard cosmetically ugly fruit and vegetables to supermarkets dumping short-dated stock. From there, it extends to households buying too much food and to restaurants serving over-sized portions.

Ironically, Marks & Spencer is one of the better retailers when it comes to tackling food waste, recently implementing a series of tighter controls which has seen its food waste drop by 40 per cent since 2009.  It also stipulates that none of its waste here or in the UK ends up in landfill.

That aside, food waste has become one of the hottest global issues, not least because it exists alongside chronic levels of food poverty, even in supposedly first-world countries like Ireland. Research commissioned by the Department of Social Protection in 2010 indicated that one in ten people in Ireland were living in food poverty, up from 7 per cent at the height of the boom. Other surveys suggest it may be as high as 15 per cent. The food waste figures for a small country like Ireland make for unpleasant reading.

The Environmental Protection Agency (EPA) estimates Ireland produces one million tonnes of food waste each a year, comprising 500,000 tonnes of agricultural waste or surplus, with the remaining 500,000 tonnes split evenly between commercial and household waste. On a per capita basis, the average Irish person generates about 280 kilograms of food waste each year, the fifth highest in Europe.

“There’s no one solution to this problem. There’s going to have to be a major rethink at all phases of the food chain,” says Odile Le Bolloch, head of the EPA’s Stop Food Waste programme. She says throwing away uneaten food is an unnecessary waste of money especially in these straitened times.

Every kilogram of food waste costs the economy €3, which adds up to a €3 billion annually. The problem costs the average household between €700-€1,000 per year.

Producing food that is not consumed also leads to unnecessary CO2 emissions, in addition to the lost economic value of the food produced.

Indeed, a recent poll in the UK found 80 per cent shoppers claimed not to be put off by irregularly shaped produce. Tesco has recently started selling what it calls market value produce, in other words the less beautiful food, at a lower price.

By ignoring “sell by” dates and using their common sense, in other words their eyes and noses to vet food, consumers can significantly reduce their waste footprints, Ms Le Bollock says.

Regardless of the issues surrounding household waste, thousands of tonnes of surplus produce goes to waste each year simply because there isn’t a food bank in Ireland large enough to take it. One organisation trying to bridge the gap is the Bia Foodbank.

The group wants to set up a national food recovery system which will store and maintain surplus produce resulting from overproduction or shipment delays which can then be accessed by the country’s charities, many of which are too small to take in the amount of food which manufacturers want to offload. Charities and voluntary groups in the Republic currently spend €12 million on food support services every year.

“Around the country, many small local charities benefit from some form of food donation. The approach, however, is generally piecemeal and ad hoc,” Bia Foodbank chairman Jack Dunphy says.

“Due to this lack of co-ordination, and the lack of appropriate outlets for surplus food, there are huge quantities of potentially usable surplus food going to landfill, for composting or for rendering.”

Mr Dunphy says companies are willing to donate but are, understandably, anxious to ensure the food is adequately stored and used safely on secondary markets for legal reasons. In the US, producers who donate food in good faith are protected by the Good Samaritans’ Act which indemnifies them from any liability, resulting from the donation. There is no comparable legislation here.

However, Mr Dunphy believes companies are willing, even in the absence of legislation, to give to food banks provided the proper controls are put in place to ensure the food is adequately stored and safely distributed, consistent with the product guidelines.

Because disposing of surplus produce is costly, firms will actually ship the food for free and pay the food bank to take it, according to Mr Dunphy. In the US, food banks have become lucrative businesses, generating millions of dollars in profit which can be used to build up and support the organisation’s distribution network. Mr Dunphy has received positive signals from the relevant ministries regarding the group’s proposal, and he wants the Government to consider using part of the EU’s food aid budget for Ireland to fund his initiative.

He has already earmarked a site off Dublin’s M50 and estimates an initial investment of €350,000 would be enough to establish an initial food recovery system for Dublin, Kildare, Louth, Wicklow and Meath, in advance of establishing similar regional hubs in Cork, Limerick and Sligo. Mr Dunphy, who has served on the board of the European Federation of Food Banks for the last 15 years, is something of an evangelist when it comes to food, and wants to tie the project into series of community food initiatives, aimed at promoting healthier eating patterns and reducing food poverty. This is a social enterprise that needs to succeed.

Students in Trinity College, Dublin have developed a unique initiative aimed at bridging the gap between food waste and food poverty in the city. The Food Glorious Food project recently secured a service agreement with the US developer of an app which links food businesses with charities.

Restaurants and cafes wanting to donate surplus food simply post notices of possible donations via the app which will, in turn, send text notifications to nearby charities. If the charity declines the offer, the next nearest charity will be offered the food until the donation is accepted.

“The idea is to keep it all local. Ideally, the charity would be within walking distance of the business,” project leader Iseult Ward said. “Initially it was difficult to find willing businesses or charities. Fears around legal liabilities and the lack of a surplus food redistribution culture were the main barriers.”

The project, which recently made it to the bootcamp stage of Social Entrepreneurs Ireland awards, provides legal protections for food businesses by obliging participating charities to sign a legal waiver.

“By participating in this initiative businesses and charities work together to alleviate hunger and avoid sending perfectly good food to landfill,” Ms Ward said.