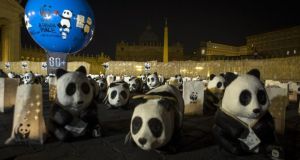 Models of pandas form part of an environmental protest near St Peter’s Basilica in the Vatican City. Its lights were turned off for 60 minutes on Saturday to raise awareness of the danger of global climatic change. Photograph: EPA/Angelo Carconi

Millions of people will go hungry due to climate change cutting food production worldwide by 2 per cent per decade even as the demand for food to supply a growing population is rising by 14 per cent per decade, according to the latest scientific report.

In the second instalment of its Fifth Assessment Report released this morning in Yokohama, Japan, the UN’s Intergovernmental Panel on Climate Change (IPCC) also warns that “human security will be progressively threatened” by global warming.

The report – which deals with climate risks, vulnerabilities and adaptation – says it will become harder for people to make a living and this will lead to mass migrations from poorer countries of “climate refugees” seeking a better life elsewhere.

The report, which contains 30 chapters, was compiled by 310 authors from 73 countries and draws on a growing volume of scientific research on climate change. Every line of its 29-page summary for policymakers had to be agreed by delegates in Yokohama.


‘High-risk impacts’
It spells out the likely impacts of different levels of warming in different parts of the world. Adaptation is a key element of the report, with tables showing that what are now classed as “high-risk impacts” could be reduced to low risk, if appropriate steps are taken.

But even with adaptation, it warns that global agricultural productivity could decline in all regions, with developing countries hit the hardest.

A net decline in ocean productivity due to warming and acidification will exacerbate this challenge, it says.

Dr Chris Field, of the Carnegie Institution of Science in California, who co-chaired the working group, said: “There is a lot more literature on the response of agriculture to a changing climate and we are able to make a more comprehensive assessment than before.”

The latest report, which follows an earlier volume released last September reaffirming the physical science basis of climate change as “unequivocal”, has a “much sharper focus on the things that can be done to reduce the risks”, Dr Field told the BBC.


Crop yields
One of the report’s lead authors, Dr Rachel Warren, from the University of East Anglia’s Tyndall Centre for Climate Change Research, said even a 2-degree increase in average global surface temperatures would have a negative impact on crop yields.

“If temperatures go above 2 degrees Celsius, we will risk melting of the Greenland ice sheet and other large-scale changes,” she warned. “By 4 degrees Celsius, there will be a high impact on global agriculture, water resources and ecosystems [in] most world regions.

“The worrying thing is that our ability to adapt to these impacts is limited. What we need to do is act fast to reduce emissions of greenhouse gases like carbon dioxide. If we do this, we can avoid a large proportion of the impacts,” Dr Warren said.

The latest report confirms that coral reefs and Arctic sea ice have suffered irreversible decline due to global warming. Such observed impacts on natural systems on all continents and across the oceans are now “widespread and substantial”.

The IPCC forecasts that the risk of death from heatstroke due to exposure to high temperatures will increase, even with a rise of just 1.6 degrees. With a rise of 2.6 degrees, drought will cause shortages of drinking water as well as water for irrigation.


‘Biggest threat’
Jim Clarken, the chief executive of Oxfam Ireland, said climate change had become “the biggest threat to our chances of winning the fight against hunger” and he predicted that an extra 50 million people would be at risk of hunger by 2050 if global warming continues.

Oxfam has estimated that world cereal prices could double by 2030, with half of this rise driven by climate change.

If global temperatures were to increase by 3 to 4 degrees, which could happen after 2050, “we will experience runaway global food crises”, it has warned.

Éamonn Meehan, the executive director of Trócaire, said the IPCC report “provides a stark reminder that the most vulnerable people around the world will become poorer, hungrier and more at risk of death or injury as a result of more extreme flooding, heat waves and droughts.

“Today’s report highlights that, without urgent action, the poorest people will face even more challenges. In 30 years, crop yields will have decreased by up to 22 per cent across sub-Saharan Africa. This will lead to even less food, higher malnutrition among children and even more humanitarian disasters.”