Protest to be held outside Dublin Castle today 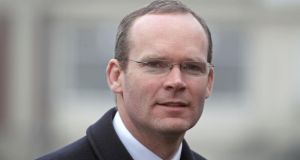 Minister for Agriculture Simon Coveney said the European Commission’s plan for a minimum single farm payment per hectare of 75 per cent of the average farm payment was too high.

Farmers receiving large amounts of money from the EU single farm payment scheme must accept that they will face a loss in income when the reform of the Common Agricultural Policy (Cap) is agreed, Minister for Agriculture Simon Coveney said yesterday.

He said there must be some redistribution of the single farm payment between farmers. “Farmers that are getting very high payments per hectare at the moment will lose some of those payments and farmers that have been getting very low payments will gain. And farmers that are close to the average aren’t going to win or lose significantly,” he said. “I think that’s fair and most people would recognise that.”

Key players
Mr Coveney was speaking after a meeting at Dublin Castle between European agriculture ministers, the EU commissioner for agriculture, Dacian Ciolos, and members of the European Parliament’s agriculture committee. For the first time, the reform of farm policy must be agreed by the parliament, as well as the council of ministers and the European Commission.

“We’ve never before had the key decision-makers in the European Parliament as well as obviously the full council of ministers and the commission all in the one room debating Cap reform,” he said.

Mr Coveney said he believed a new Cap deal could be agreed before Ireland’s EU presidency ended next month but there were still some very difficult issues to be resolved.

He said the European Commission’s plan for a minimum single farm payment per hectare of 75 per cent of the average farm payment was too high. “That’s something we do not have agreement on yet and it will probably take a number of weeks to finalise that,” he said. “We are working with the three institutions and all of the key decision-makers, including the commissioner ... to find a compromise that everybody can live with and stand over.”

Concerned groups
Farm groups including the Irish Farmers’ Association (IFA), the Irish Cattle and Sheep Association and the United Farmers Association met the agriculture commissioner yesterday. IFA president John Bryan said he told Mr Ciolos his reforms would not work for Ireland. He said a mandatory minimum payment would take money from productive farmers and give it to inactive farmers which would be “hugely damaging” for Irish agriculture. IFA members will stage a protest outside Dublin Castle today to highlight their concerns.

However, the United Farmers Association said it was broadly supportive of the plan and said the system where some 80 per cent of payments went to 18 or 20 per cent of farmers was “devastating the broad sweep of Irish farming and rural communities”.

1 Aaron Brady, the man who said with pride he was a cop killer
2 A year after Nóra Quoirin’s body was found, her parents still believe she was abducted
3 Aaron Brady found guilty of capital murder of Det Garda Adrian Donohoe
4 A chronicle of dignity and despair
5 State to investigate claims of bogus employment practices in meat sector
Real news has value SUBSCRIBE