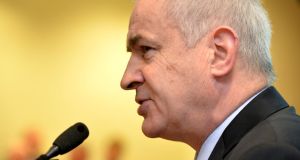 IFA president Eddie Downey who said today that agriculture in Ireland is amongst the most emission-efficient in the world. Photograph: David Sleator/The Irish Times

Irish farming organisations have defended the environmental record of farmers, following the release of the report from the UN’s Intergovernmental Panel on Climate Change.

The report warns that millions of people will go hungry due to climate change cutting food production worldwide by two per cent per decade.

IFA president Eddie Downey said Ireland and the EU was leading the way when it came to agriculture and climate policy.

“Agriculture in Ireland is amongst the most emission-efficient in the world,” he said. “As a major international exporting nation of sustainable food, it is essential that the ongoing international discussions recognise this.”

Mr Downey also called for a shift in the international climate debate “away from fatalistic predictions of future outcomes to a focus on measures that communities can deliver, such as supporting the development of sustainable food production to meet increasing international food demand”.

Irish Creamery Milk Suppliers Association president John Comer said farmers were more aware than most of the implications of climate change and they stood to feel the effects first. He said it critical that the report did not become “some form of stick with which our hugely important farming and agri-export sector was going to be beaten”.

Mr Comer said the same science that measured the progress of climate change must now be used to argue that those states that could produce food with the least environmental impact should be those states where food production was supported. He said it was vital that the Irish Government insisted that any kind of ‘equity of contribution’ in emissions reduction introduced by the EU Commission took account of the cost of food production in different states as well as the importance of that food production to the state.

Ireland must not permit itself to be bounced into an “across-the-board, crude, emissions reduction system” that nullified our advantages in food production for the sake of “some questionable definition of equity of contribution”, he said.