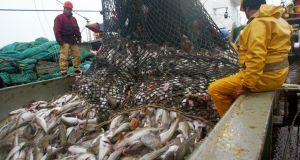 The Irish Wildlife Trust has expressed concern about what it describes as the “continuing decline of the marine environment in the Irish Sea”, following the outcome of this week’s EU fish quota negotiations for 2016 in Brussels.

The trust said that scientific advice that no fishing for cod or whiting should be carried has been “routinely ignored” since 2004, as has similar advice for sole from 2007.

“Cod stocks in the Irish Sea have declined tenfold since the 1980s, according to the Marine Institute, ”the trust said.

It also expressed disappointment that there had been “little change in management of the Irish Sea” in this regard under the new Common Fisheries Policy, which came into effect in 2014.

“The ecosystem is on course to be so damaged that we could be looking at a sea full of jellyfish and little else in the not too distant future,” trust chairman Pádraic Fogarty said.

Birdwatch Ireland’s head of policy Siobhán Egan, who attended the negotiations in Brussels as an observer, called for greater transparency from the European Commission in terms of how such agreements are reached.

“The good news is that [European] ministers adopted many fishing limits in line with the scientific advice from the International Council for the Exploration of the Sea (ICES),” she said.

“For other stocks, however, ministers exceeded the ICES advice,”she said.

Ms Egan said that this “short-term” approach had long-term implications for fish and the fishing industry.

“Continued overfishing of certain stocks puts this natural resource under pressure, as stocks won’t have a chance to recover,” she said.

“This puts the fishing sector under pressure too. We are witnessing ongoing delays in bringing about the fundamental changes that were due to happen for fisheries in Irish waters.”

The annual pre-Christmas talks, which ran into the early hours of Wednesday morning, resulted in a 10 per cent increase in the whitefish quota share for the Irish fleet, Mr Coveney said.

A key factor was an additional quota for certain species that will be subject to a ban on discarding at sea for the first time from January 1st.

Pelagic species such as mackerel are already subject to the ban, but four whitefish species - prawns, whiting, haddock and hake - will now be subject to the measure.

The ban means that vessels must land all members of these species caught at sea, even if they are undersized or over-quota.

These extra allowances, known as “quota uplift”, should also ensure that fishermen are not forced to tie up earlier than usual once the quota is exhausted.

Mr Coveney said that ports around the coast would benefit from the catch allocation, especially in terms of prawns - one of the State’s most valuable fisheries - which had faced a 10 per cent cut.

The EU fisheries council also agreed to further conservation measures for endangered sea bass, which will include a catch and release system for the recreational angling fishery for the first half of 2016, with a “one-fish bag” limit for the second half of the year.

“All in all, the package negotiated by Mr Coveney and his officials is a good one,” Mr O’Donnell said.

“A very committed and significant effort was made by Mr Coveney to secure a fair deal for Ireland in terms of northwest herring, a very valuable fishery for Ireland.”

However, Mr O’Donnell said that a deal could not be reached on the northwest herring fishery due to British opposition to the State’s request for a 50 per cent share.

He also said that most member states were “furious” with the European Commission for agreeing to a “Machiavellian” approach on blue whiting, which has resulted in the EU and Norway fishing separate total allowable catches.