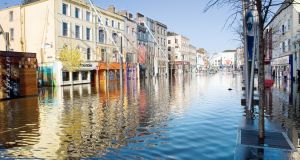 The ESB needs to put together a compensation package for householders impacted by the 2009 floods to avoid dragging elderly people through the courts process, a spokesman for the residents in impacted areas has claimed .

The ESB is facing a multimillion-euro bill after the High Court ruled it was 60 per cent liable for damage caused to buildings in UCC and surrounding areas for failing to act on mounting information of flood risk to properties. UCC was ruled 40 per cent liable.

Brendan Keane, of the Mardyke Residents Association, said householders were left out of pocket for sums of up to €100,000. He said many householders lost valuable mementos and saw their homes ruined after floods engulfed Cork city in November 2009.

Elderly, vulnerable people shouldn’t have to endure the courts process to receive payment, he said.

“The two things the residents always wanted was an apology from the ESB acknowledging that they had made a mistake and putting right any loss or damage that has occurred to the residents. The ESB shouldn’t drag the residents through the courts and put them through the trauma.”

“If the ESB sat down and talked to the residents, most of them are very reasonable people. They just simply want to go back to the lives they had before the flood.”

Meanwhile, a tennis club in Sunday’s Well in Cork city is examining its options in taking a case against the ESB.

John Walsh, spokesman for the Sunday’s Well Tennis Club, said they were out of pocket for about €200,000 due to damage caused by the flooding.

“We didn’t have insurance because you can’t get insurance here so close to the river. We have an appointment with Joe Noonan [solicitor] and it is likely that we will take a case. It’s taken us a couple of years to get the club back to normal. We were up all night the night of the flood. The place was very badly damaged.”

Mr Noonan, who represents 40 property owners, said members of the public should take legal advice on options as soon as possible. A public meeting will be held later this month for flood-impacted householders who have still yet to file a claim.

Mr Noonan said property owners had suffered “insurmountable hardship” arising out of the flooding and the inability to insure houses was a “major hardship”.

A group of about 40 property owners are taking a group case against the ESB, with a further 25 taking separate cases against the service provider.

Cork Business Association is also considering its position, as many firms have been unable to get insurance since the flood.

The exact figure the ESB and UCC will have to pay out will be decided by the High Court at another stage.

In a statement on Tuesday, the ESB said a review is being made of the judgment.

“ESB is reviewing the judgment and considering whether there are grounds to appeal. The judgment runs to over 500 pages. Once we have completed our review over the coming days, we will be in a better position to make a decision.”

1 Sinn Féin’s stand on Covid is facing increasing questions from political rivals
2 Love in a time of Covid: John and Mary marry over 40 years after first meeting
3 Coronavirus: Close contact numbers fall in sign restrictions may be working
4 Cab investigates behind the massive gates of Chosen Few Motorcycle Club in Dublin
5 Two hundred Irish retailers for all your online Christmas shopping
Real news has value SUBSCRIBE