Duncan Stewart: ‘Give me 10 minutes or I’m not staying’ 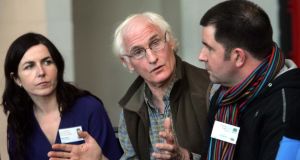 The broadcaster and environmentalist Duncan Stewart threatened to walk out of a radio interview this morning, while simultaneously demanding to be given time to make his case on climate change.

In a fraught encounter with Newstalk radio’s Shane Coleman, Stewart became increasingly strident and seemingly emotional as he talked about climate change and, as he saw it, the media’s refusal to engage with the subject, during an interview on Newstalk Breakfast .

“Everybody seems to avoid climate change because it’s not popular, it doesn’t bring in ratings, it’s not good for advertising, and that’s a fundamental issue with all media, including press,” he said. “The biggest issue ever facing human beings is climate change and it’s happening now and it is going to affect our children. . .”

He asked Coleman: “How much time have I got here by the way?” He had just confirmed that he was “stepping down” from his role as a presenter with RTÉ because he had “issues” with the station. “I’m criticising all the media. All of the media is being, in my view, irresponsible on climate change,” he had said.

In response to his query about time, Coleman replied: “You have plenty of time...”

“Well, I want plenty of time,” replied Stewart, continuing: “How much time have I got? You tell me how much time I’ve got. Listen. Do you want me to talk here?”

Coleman said he did.

Stewart continued: “Well then tell me how much time I’ve got because I want to know. I’ve a lot to say here. . . Listen. Listen. I can walk out of this studio this minute if you wish. Do you want me to do that?”

Coleman: “Why would you walk out of the studio?”

“Give me 10 minutes or I’m not staying in this studio,” he said, his voice seeming to break.

The minute-and-a-half-long exchange ended when Coleman said he could have a further 10 minutes. Stewart had earlier criticised the media’s reporting of climate change, asking would equal space be given to arguments for and against tobacco and cancer, and the Holocaust, as to those querying climate change.

“We need to wake up. We’ve done damage to the atmosphere that is irreversible and we have to realise that climate change is coming down on us very quickly - and the media need to take responsibility,” he said.

Stewart, who said he had produced over 400 programmes for RTÉ and that he commanded an average of 745,000 viewers per programme, confirmed that he was considering running in the European elections but declined to say whether he definitely would stand.

Co-presenter Ivan Yates then chipped in: “You have to get elected first.”

Yates: “Getting elected is a simple matter?”

“For me it is,” said Stewart, adding that people were looking for vision.

Newstalk Breakfast editor Garret Harte said afterwards he was “happy with the debate” as reactions to the programme on social media piled criticism on Stewart.

Efforts to contact him after the programme proved unsuccessful.