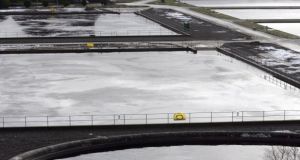 Ongoing problems with the Dublin regional water supply system have resulted in some homes being temporarily “uninhabitable” while some businesses have been forced to remain closed in recent days.

The Dublin water supply system which serves the four local authorities in the capital, and parts of Kildare and Wicklow has been operating below demand levels, on a number of occasions in recent weeks as engineers continue to battle an algal bloom problem at Roundwood, in Co Wicklow.

As capacity at the Roundwood drops to some 50 percent when the bloom is being cleared,homes in parts of the region have lost supply up to fifteen days, while last week businesses in Enniskerry closed for a number of days because they had no water.

According to Dublin City Council, because the whole system is operating at near capacity, the removal of part of the Roundwood plant means production in the region is occasionally below demand.

Last week in the Dáil fellow Wicklow TDs Simon Harris and Stephen Donnelly quizzed Minister for Environment Phil Hogan about the problem which they said has been ongoing for months and is causing severe hardship to householders and existing businesses, while also putting a severe constraint on development throughout the region. Mr Harris said there were local reports that the problem would not be fixed in the foreseeable future, a situation which was unacceptable.

Mr Hogan said he was aware of the problem and the positioning of water tankers at a range of locations across north Wicklow. His department’s engineers were providing support to Dublin and Wicklow local authorities to resolve the matter, he said. Last April Dublin City Council passed an emergency motion calling for urgent action on the problem and pledging “best practise” communications to affected householders.

However householder Conor Fitzsimmons of Delgany in County Wicklow said his water supply is interrupted without notice. Mr Fitzsimmons said homes at Tooman Road at the Willow Grove had been without water for up to 15 days. An engineer, he said he was calling for pressure to be reduced to Dublin city overnight to allow a build up of pressure to upland areas elsewhere. “It would be better that 100 percent of us got a supply at some time of the day, rather than 90 percent got a supply all day and 10 percent got none, he said.

Peter Norton who runs Poppies Country Cooking in Enniskerry said his was one of a number of businesses forced to close last week. Enquiries to Wicklow County Council, he said, were met with the response that notices were posted on the council’s website. “We just don’t know when we will have water to provide toilets or to make tea” he said.