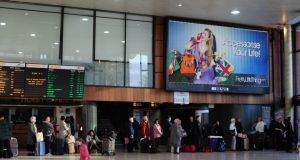 Bus Éireann has criticised the Green Party’s proposal that Dublin’s Busáras should be opened up to private bus operators even though the party itself described it as “congested”.

This made its position “contradictory and very confusing”, the State-owned company said.

“The opening up of Busáras, the central bus and coach station in Dublin city centre, is not possible as Busáras is at its full capacity,” it said, adding that the Green Party had not contacted the company directly about issues raised in its press release on Tuesday.

Referring to the party’s proposal that a second city bus station should be located on the Conyngham Road bus garage site, opposite Heuston Station, Bus Éireann said its customers “want travel directly into the city centre rather than stop at Heuston”.

The Green Party had said Dublin needed a second bus station to supplement Busáras and prevent some of the city’s Georgian squares being used as bus parks.

The second bus station should be located on the western approaches to the city centre to cater for buses serving the west and southwest, the party said.

It also called yesterday for Busáras to be opened opened up to private bus operators.

“The Dublin Bus garage on Conyngham Road would be a perfect location for a new station,” said transport spokesman Tom Kivlehan. “With a new footbridge across the Liffey, it would only be a two minute walk from Heuston Station and the Luas Red line services.”

He said buses currently based in Conyngham Road could be switched to the underutilised Bus Éireann depot at Broadstone. “This could be carried out quickly with minimal cost and disruption,” he said. “It would take traffic off the quays and would stop some of our most beautiful Georgian squares being used as bus parks.”

Mr Kivlehan said it made “no sense” to send all Bus Éireann services to the one congested location in Busáras. “Nor does it make sense to force private bus companies to dump their passengers on the side of the street, causing problems for both the passengers and for other road users,” he said.

He complained that the National Transport Authority’s latest recent plan for Dublin was “strangely silent on the need for a radical overhaul of the long distance bus services into and out of the city”.

“Putting the public and private services in the same station would improve both collaboration and competition between the different services and would be good for the consumer,” he said.

“There is no reason why the same sharing of bus stations could not also take place in Cork, Limerick and Galway where the current rivalry between Bus Éireann and the private operators leads to a similar chaotic situation to what is happening in Dublin.”