Dublin City Council rows back on speed bumps for cyclists 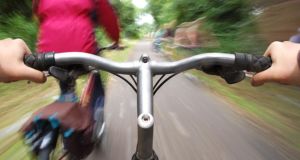 Speeding along a cycle path: council has abandonned plans for speed bumps.

Dublin City Council is rowing back on plans to put speed bumps on its new flagship cyclepath along Dublin bay.

The council was investigating the use of the ramps, which it said were used in the Netherlands, to reduce cyclists’ speeds on the Clontarf section of the Sandymount to Sutton (S2S) cyclepath.

However on examining the Dutch ramps it discovered they were for use on cyclepaths which were shared with mopeds, to reduce the speeds of the motorised vehicles, and were not intended to slow cyclists down.

The council is shortly to begin construction of the first section of the S2S route at cost expected to be in excess of €5 million. The section, from the Wooden Bridge to Causeway Road in Clontarf, will link the two existing cyclepaths along the northside of Dublin bay.

The council’s traffic department had been asked by councillors to look at installing “bicycle-calming measures” on the new path and retro-fitting them on the existing cycleway to protect pedestrians.

It had thought it had identified the solution in the Dutch Design Manual for Bicycle Traffic, but now realises the measure was designed to protect cyclists not walkers.

“This design intent is negated due to the fact that motorised vehicles are not permitted on dedicated cycle ways in Ireland,” it said.

The cycleway is flanked by two footpaths and councillors were particularly concerned about the points where pedestrians might cross the cyclelane to access the footpaths.

The council’s traffic department now says that the solution might be for “appropriate personal responsibility” to be exercised by pedestrians and cyclists to avoid collisions.

“If a cyclist is approaching a conflict area and there are no pedestrians then the cyclists, if it is safe to do so, should travel at a speed that they are comfortable with.”

However there was a need to differentiate the cycle and walking areas at junctions along the path, it said. This would be done through different coloured materials and tactile paving, which would “stop either road user straying off from their designated space” it said.

“This will provide a significant tactile feedback to cyclists and not adversely affect braking. It is the preference of National Council for the Blind of Ireland that tactile be retained in any design for the scheme.”

The use of ramps was “unlikely to have the desired effect to calm cyclist speeds” and “may discourage use of the facility and create more hazards on the carriageway” the council said.