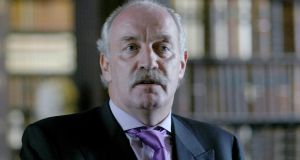 Businessman and financier Dermot Desmond. The appeal has been launched on behalf of his wife. Photograph: Joe St Leger

Planning consultants for the wife of businessman Dermot Desmond have warned that the Desmonds’ property on Ailesbury Road in Dublin 4 faces an increased risk of flooding if a next door neighbour’s basement plan proceeds.

In November, Dublin City Council granted planning permission to former model Karen Reihill to proceed with the 1,650sq ft basement plan, which has a much larger floorspace that an average three bedroom semi-detached.

The basement will include two en-suite bedrooms, a playroom and plant room accessed via a lift. The plan also includes the demolition of an existing two-storey extension above ground and its replacement.

Next-door neighbour Pat Desmond has appealed the decision to grant planning permission to Ms Reihill to An Bord Pleanála.

Mr Clear states that “the basement is likely to penetrate the ground water level and displacement of flooding will occur into adjoining properties”.

He states: “Given these circumstances, worst-case scenarios should be assessed before any decision to grant permission is made.”

Mr Clear adds: “Particularly, a residential basement should not be tolerated under any circumstances and no basements should be allowed in residential conservation areas or near protected structures.”

In a submission to Dublin City Council on the plan, Dr Patrick Gavin, chairman of the Ailesbury Residents Association, said that “previous basement excavations and flood histories along the road have led us to be wary of proposed basements and their knock-on effects in relation to drainage.”

A decision is due on the appeal in May.