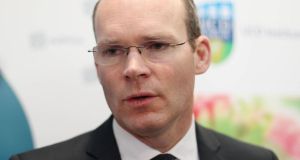 Minister for Agriculture and Food Simon Coveney: denied the Government was seeking a “free pass” on its climate-change obligations. Photograph: Niall Carson/PA Wire

The Government has achieved a “major policy breakthrough” on climate change at European Commission level, Minister for Agriculture and Food Simon Coveney has claimed.

Mr Coveney said senior officials at the commission were accepting Ireland’s argument that agriculture and forestry should be treated differently from other sectors.

The EU’s approach to climate change may now change because of the case advanced by Ireland that agriculture be treated as a distinct category,

“The commission is now looking at a third category in terms of target setting for the first time. There is the traded sector and then the non-traded sector which includes transport and power. Now they are saying there is a third pillar. It is around food and land use.”

Mr Coveney has argued it would be counter-productive asking a country like Ireland to slash emissions in agriculture, resulting in a dramatic reduction in food output to the EU and elsewhere from this country. He has said the demand for food would be unchanged and would instead be met by countries which produced food in a much less sustainable manner and with a larger carbon-footprint.

Ireland is an outlier compared to other EU countries in that agriculture comprises a much larger proportion of the economy here than elsewhere. Ireland faces onerous targets of 20 per cent emissions reductions by 2020 (compared to 1990 levels) in the non-traded sector, with agriculture accounting for about a third of that amount.

At the same time, the State, through its Harvest 2020 programme, is expanding the agriculture and food sector and is targeting substantial continuing growth in the beef and dairy sectors, especially with the ending of quotas.

Irish argument
Speaking to The Irish Times, Mr Coveney said commission officials at senior level were accepting the argument advanced by the Government for the first time, in the context of the 2030 climate change and energy framework. However, he conceded it had yet to be accepted at the highest political level.

“It’s a major policy breakthrough . . . We now have within the commission, senior officials accepting the Irish argument that land use and agriculture and forestry are different and may need a different consideration.”

Mr Coveney pointed out that one way or another there was a global need for 50 per cent more food in volume terms over the next 30 years. “The question is where does this volume comes from. A total of 70 per cent of water use is in agriculture and irrigation systems. If you are to produce food and need more water to feed people . . .”

Global strategy
“There needs to be a global strategy. Surely you should be producing it in countries that don’t have water stress problems and where there is acceptable animal husbandry,” he said.

Mr Coveney denied the Government was seeking a “free pass” on its obligations saying it was arguing that sustainability should be the measurement.

He said he wanted Ireland to become the most sustainable food producer in the world. “In transport, you can change from a car to a bike or from diesel to electric but it’s not changing your ability to move around. “The problem for food is if we produce less beef or milk, consumers will demand the same amount but will import it from somewhere else . . .

“In Germany there is a growing market for Irish beef. If it no longer imports beef from Ireland it will go to Argentina or Brazil. I can say with certainty that it would be negative in terms of emissions,” he said. “It is one of the reasons we are moving down the road of measuring the carbon footprint of beef and milk.

“We know we have a competitive advantage and can sell it on the basis.”

Gardaí take to streets of Kildare, Laois and Offaly as NPHET warns lockdown could be extended

1 Midlands lockdown: ‘Why shut down Offaly and leave Dublin open?’
2 Gardaí take to streets of Kildare, Laois and Offaly as NPHET warns lockdown could be extended
3 Sand-hued cyclepaths changing the face of south Dublin coast
4 Inside the dog-trafficking trade: ‘After drugs, it’s guns, then pups’
5 Meat plant clusters may be down to softly-softly approach
Real news has value SUBSCRIBE

Gardaí take to streets of Kildare, Laois and Offaly as NPHET warns lockdown could be extended 12:12
German nudist chases wild boar that stole laptop at Berlin lake 11:14
DoneDeal suspends adverts for sale of dogs after spate of dog thefts 06:00
Half of people in direct provision ‘unable’ to social distance 04:05
Urban congestion charges under consideration 04:05