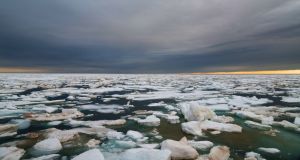 The Arctic is heating up faster than anywhere else and the results are plain to see: the ice is melting. Photograph: Cory Glencross/iStock/Getty

The relentless advance of climate change has entered dangerous new territory with news that the Earth’s atmosphere now carries more than 400 parts per million of the greenhouse gas carbon dioxide.

Some will say the sky did not fall in, that a cataclysm has not struck as we reach this exceptional level, but it is, nevertheless, a significant milestone. Driven largely by human’s voracious consumption of the Earth’s resources, quite a lot of change has already happened. And changes to normal patterns continue to happen as average temperatures rise in tune with the levels of carbon dioxide, a gas humans helped to put there.

The Arctic is melting and along with it the mountain glaciers, including the Alps and Mount Kilimanjaro in Tanzania. Ice loss in the Antarctic is happening differently, melting from the bottom up along its Amundsen Sea coastline. Plants, animals and sea life are moving towards these melting poles, putting distance between them and the hotter climes they are trying to escape in mid-latitudes.

Plants, animals, birds and fish that cannot migrate die, so change means the largest planet-wide mass extinction yet recorded. The five previous mass extinctions were blamed on colossal volcanic eruptions that poisoned air and sea or on impacts with giant meteors like the one that wiped out the dinosaurs.

This one, unfortunately, can be blamed on the most dangerous species on Earth – Homo sapiens sapiens. That’s us.

Habitats have been destroyed, the world polluted, humans have even changed climate on a planetary scale. Humans watched and did nothing over the decades as the levels of carbon dioxide gradually inched upwards, disagreeing over whether we could tolerate a 1 degree change or a 1.5 degree change.

While those interested focused on the magic 400 parts per million threshold the Earth was getting on with things. It was not waiting for people to agree on new climate rules and targets. Instead, it has been building a new one, whether we like it or not.

Some parts of this, for example ocean acidification, can almost certainly be blamed on rising carbon dioxide. The seas work as a natural sink soaking up the gas but this leads to a chemical reaction that makes the water more acidic. Acid is a killer for the vast coral reefs of the Pacific Ocean, which in turn are a rich habitat for thousands of marine species. Gradual acidification is also a threat to many more species, just as it was in past mass extinction events.

In other places, southwestern United States, for example, climate change is a contributor to an ongoing five-year drought, rather than the outright cause. Global warming’s hand is seen in higher temperatures and a loss of snowpack in the mountains, snow that becomes meltwater to feed huge rivers such as the Colorado and the reservoirs these rivers fill.

Climate change deniers continue to insist that there is too little evidence to prove climate change is happening but fresh evidence is delivered every day. A new study published last Tuesday showed that thousands of cubic metres of ice were lost not from the top but the bottom of a glacier in West Antarctica that runs into the Amundsen Sea.

Lead author Ala Khazendar of California Institute of Technology and colleagues believe that the influx of water warmed by climate change flushes in under the base of the glaciers to melt them from underneath. This has removed up to half a kilometre of ice thickness between 2002 to 2009.

If there are any doubts about ocean warming then the latest statistics from the US National Oceanic and Atmospheric Administration should clarify. The average global sea surface temperatures for January-September 2016 were the highest in 137 years of measurements.

Long before the 400 parts per million figure was set as a target for the politicians to chase, climate change was under way, with years of data on hand to describe what was happening.

Climate deniers will persist, but protestations are a waste of time. The issue is that climate has veered out of what is considered “natural variability” and continues to change and will do so probably for centuries until the excess carbon in the atmosphere starts to decline.

It is difficult to argue with the fact that 2015 was the warmest year on record since records began in 1880, with figures provided by the US National Oceanic and Atmospheric Administration. This is a long-term change given 15 of the past 16 record-breaking years have occurred since 2001.

The latest numbers show that 2016 is also creating records. The months between January and September were the hottest on the NOAA’s record. Average land surfaces were the second warmest and sea temperatures the warmest over 137 years of data. Higher carbon figures are driving it all, from lost biodiversity to storms, flooding and coastal erosion among others.

By some twist in Earth’s air and water circulation the Arctic is heating up faster than anywhere else and the results are plain to see: the ice is melting. Scientists fear it could all disappear by mid-century.

Arctic sea ice hits its smallest size in September. This year it covered 4.72 million sq km, the fifth-lowest in the satellite record, says the US National Snow and Ice Data Centre. The record low of 3.63 million sq km was set in 2012.

The slow decline, if it persists, will open up channels along ice-free coastal regions that will allow shipping to navigate the Arctic 12 months of the year. Ice loss could be accelerated as the Arctic Ocean warms.

Scientists have known for years that increasing amounts of ice were melting from the surface of Greenland’s ice sheets with the water running down through channels and into the north Atlantic. However, research shows that things are worse than realised. The ice pack was at its thickest 20,000 years ago. Its weight was enough to push down the Earth’s surface there. As the ice melted the reduced weight allowed the bedrock to “rebound” upwards.

Scientists attempted to account for this in satellite data but the latest data shows the rebound is faster than thought so the ice loss is worse than estimated. Greenland lost an estimated 400 cubic km of ice a year over the period 2008 to 2012.

Some will think this does not matter to Ireland, but think again. The rapid melting has produced a vast “blob” of cold water in the north Atlantic off our west coast.

It is already influencing our weather. Climatologists say they are uncertain about the impact this pool of cool surface water may have on climate but also on the Gulf Stream.

Almost all of Europe’s glaciers are in retreat. Alpine glaciers have lost about two-thirds of their volume since 1850, with melting accelerating since the 1980s, says the European Environment Agency. This meltwater runs into rivers and ultimately the oceans to cause sea level to rise measured at 0.8mm a year.

The glaciers’ disappearing act is not unique, with glacier loss ongoing in Greenland, Alaska, Canada, Himalayas, central Asia and everywhere in the tropics, according to a study in the journal of the European Geosciences Union.

Bolivia’s glaciers shrank by 43 per cent over the period 1986 to 2014 – the passage of a single human generation.

The run-off raises sea levels, but it also hits water supplies for people who rely on meltwater from glaciers and snowpack.

In California, this provides a third of the state’s water. This March, the state’s snow-pack was 13 per cent below normal, the US Geological Survey says.

Mount Kilimanjaro is another measure. A 1912 survey provides a baseline. Then, the mountain had a completely white top, with glaciated areas covering 11.4 sq km. By 2011, a century later, it was down to 1.76 sq km. Scientists expect the retreat to continue. By 2040, the ice will have completely gone. If the ice does disappear it will expose rock surfaces atop the mountain for the first time in 11,000 years.

Next Friday the Paris agreement on controlling climate change will come into force, setting out goals to stabilise CO2. It could be a “turning point”, according to Denis Naughten, the Minister for Communications, Climate Action and Environment.

Now ratified internationally, the focus moves to Marrakesh in Morocco where the first steps will be taken to make the agreement a reality.

All the while, the Earth will continue to evolve to what has been already done. Marrakesh will have to deliver – for all our sakes.