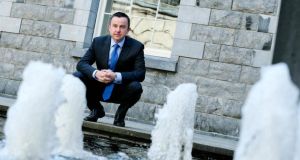 Climate change deniers “are lying to themselves and lying to the country and they need to be swept aside”, Minister of State Brian Hayes has said.

Mr Hayes, who has responsibility for the Office of Public Works, was speaking during a question-and-answer session at an OPW flood-risk management conference in Dublin Castle.

“The scientific evidence confirming climate change is compelling,” he told the 250 attendees, many of whom came from communities in the south and southeast badly affected by the past winter’s storms and flooding. “We must now accept the reality of climate change and prepare for the likely consequences.

“Coping with frequent flooding will, in some cases, mean working with nature, rather than controlling it.

“In some situations flood management may include the restoration of natural flood plains and a willingness to allow rivers to flood in a controlled manner in order to prevent greater damage.”

Dealing with the problems generated by climate change meant being “honest and realistic about what we can do”. Not every yard of coast or beach could be protected; “we cannot defend every field”.


Very local
He continued: The political system also needs to grow up. Because politics in Ireland is very local – it’s equally very short-term. We are not good at planning for the long-term and having to make tough choices especially when it comes to good planning and development. If ever we need a national response, it is on this issue.”

He criticised some planning decision of recent years that had seen building permitted on known flood plains, and warned that the State would not compensate, or underwrite, the financial consequences of such decisions in the future.

The conference heard from several senior staff at the OPW on the Cfram programme – the Catchment-based Flood Risk Assessment and Management project – under which the likelihood of flooding along the country’s major rivers and 90 coastal areas is being quantified scientifically. Based on this, maps will be published this summer showing where flooding is likely and what action, if any, needs to be taken.

The conference heard of the benefit of major flood defence works in Clonmel, Ennis, Kilkenny and on the rivers Dodder and Tolka in Dublin.

Flood defence schemes due to start this year include Claregalway, Bandon, Templemore, Bray and Skibbereen.

The conference also heard from speakers representing the insurance industry, agriculture and business.

Ian Talbot of Chambers Ireland spoke of the employment and financial costs of repeated flooding, and cited one small firm in Coothill that lost €15,000 a week over the past winter due to flooding.

Tom Turley of the IFA said the Shannon and other rivers should be dredged. “We can’t wait for reports and planning.”

Further information on Cfram may be had from cfram.ie