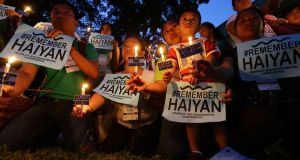 Filipino environmental advocates take part in a vigil to commemorate the victims of Typhoon Haiyan in Quezon City on November 5th. They staged the demonstration to raise awareness of climate change. Photograph: Mark R Cristino/EPA

Without the right policies to keep the poor safe from extreme weather and rising seas, climate change could drive over 100 million more people into poverty by 2030, the World Bank has said.

In a report, the bank said ending poverty – one of 17 new UN goals adopted in September – would be impossible if global warming and its effects on the poor were not accounted for in development efforts.

But more ambitious plans to reduce climate-changing emissions – aimed at keeping global temperature rise within an internationally agreed limit of 2 degrees – must also cushion poor people from any negative repercussions, it added.

“Climate change hits the poorest the hardest, and our challenge now is to protect tens of millions of people from falling into extreme poverty because of a changing climate,” World Bank group president Jim Yong Kim said in a statement.

The bank’s estimate of 100 million more poor by 2030 is on top of 900 million expected to be living in extreme poverty if development progresses slowly. In 2015, the bank puts the number of poor at 702 million people.

He described ending poverty and tackling climate change as “the defining issues of our generation”.

“The best way forward is to tackle poverty alleviation and climate change in an integrated strategy,” he told reporters.

Poor families are more vulnerable to climate stresses than the rich because their main assets are often badly built homes and degrading land, and their losses are largely uninsured, the report said.

Low-income households in sub-Saharan Africa and South Asia are particularly at risk of having their hard-won gains wiped out by climate-linked disasters, forcing them back into extreme poverty, it added.

The report warns that, between now and 2030, climate policies can do little to alter the amount of global warming that will happen, making it vital to invest in adaptation measures and broader ways to make people more resilient.

When Cyclone Pam devastated Vanuatu in March, a payout from a regional catastrophe risk scheme helped speed the response. When drought in Ethiopia led to a hunger crisis in 2011, a national programme providing food and cash in return for work on community projects was quickly expanded.

Better social safety nets and health coverage for all, together with targeted improvements such as flood defences, early warning systems and hardier crops, could prevent or offset most of the negative effects of climate change on poverty in the next 15 years, the report said.

“We have a window of opportunity to achieve our poverty objectives in the face of climate change, provided we make wise policy choices now,” said Stephane Hallegatte, a senior World Bank economist who led the team that prepared the report.

Roome highlighted the need to roll out good policies faster, and ensure development projects consider climate projections, so that new infrastructure is not damaged in the future.

Beyond 2030, the world’s ability to adapt to unabated climate change will be limited, warned the report, released ahead of the UN climate summit from November 30th to December 11th, in Paris, where a new deal to curb global warming is due to be agreed.

To rein in the longer-term impacts on poverty, immediate policies are needed that bring emissions to zero by the end of this century, the World Bank said.

Some of those will have benefits for the poor, such as cleaner air, more energy efficiency and better public transport. Others could increase energy and food prices, which represent a large share of poor people’s expenditures, the report noted.

But policy shifts need not threaten short-term progress against poverty provided they are well-designed and international support is made available, it added.

For example, savings from eliminating fossil fuel subsidies could be reinvested in assistance schemes to help poor families cope with higher fuel costs.

Or governments could introduce carbon or energy taxes and recycle the revenues through a universal cash transfer that would benefit the poor, the report said.