Climate change and the threat to our cultural heritage

The Louvre fell victim to extreme weather this month. Venice, Yellowstone and the Statue of Liberty are also all at risk from global warming. What can we do? 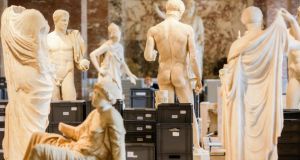 The timing was grimly appropriate. No sooner had the United Nations stressed the risk that climate change poses to world heritage sites than curators at the Louvre, in Paris, rushed to move 250,000 artworks to safety from flooding. Extreme weather had forced the closure of one of the world’s most famous museums – a museum, what’s more, that is at the heart of the Banks of the Seine world heritage site, which stretches from the Eiffel Tower to the Île St Louis, and where the river rose 6m above its normal level this month, to reach a 30-year high.

A week earlier the UN had convened its second environment assembly, in Nairobi, to try to tackle critical issues that are facing the planet, from air pollution, which it says kills millions of people a year, to the illegal wildlife trade that is “pushing species to the brink of extinction”. World heritage sites were on the agenda because “climate-driven changes currently, or could in the future, threaten their outstanding universal value, integrity and authenticity, as well as the economies and communities that depend on tourism”, according to World Heritage and Tourism in a Changing Climate, a report published at the assembly by the United Nations Environment Programme, the UN Educational, Scientific and Cultural Organisation, and the Union of Concerned Scientists.

Its authors say that we need to better understand, monitor and address the threats to heritage sites. “We need to understand how climate change will interact with and amplify the effects of other stresses, including urbanisation, pollution, natural resource extraction and, increasingly, tourism.”

Coral bleaching is one of the most striking examples of the way that climate change can destroy our heritage. Bleaching happens when the seawater becomes too warm, forcing coral to expel the algae that give it most of its colour. This process has already destroyed a third of the northern and central sections of the Great Barrier Reef, in Australia. Mildly bleached coral can recover if the temperature drops, but otherwise it may die.

World Heritage and Tourism in a Changing Climate

At other world heritage sites, historic buildings and monuments can be vulnerable to extreme wind and rain, to flooding and to coastal erosion; their foundations, for example, can be destabilised by changes in the moisture of the soil around them and by changes to the freeze-thaw cycle. Inside buildings, climate fluctuations can cause mould, rot and insect infestations. Rising water levels in the Adriatic have already damaged hundreds of buildings in Venice; the city has almost finished building a series of flood barriers.

Climate change provides us with a new lens through which to view problems. Unesco’s list of endangered world heritage sites does not specify climate change as a risk, but it does prioritise reducing heritage sites’ risk from natural and man-made disasters.

The authors of World Heritage and Tourism in a Changing Climate say that heritage sites can help mitigate climate change. Healthy forests and coastal habitats, for example, can help store carbon and protect against storms and flooding. The report adds that protecting ecosystems is the most effective way to maintain the adaptive capacity of natural world heritage sites.

“There are archaeological sites eroding all the time because of the increase in storms and rising sea levels. There are also historic bridges at risk, habitats washed away and town walls damaged by more extreme temperature,” says Beatrice Kelly of the Heritage Council.

More than 10 per cent of the recorded monuments at Brú na Bóinne, the megalithic site in Co Meath, are already at risk from floodwaters. The site is now being monitored for damage, along with Skellig Michael, Clonmacnoise, the Rock of Cashel and Dublin Castle, by Dr Cathy Daly, a conservationist, together with the Office of Public Works.

“We are looking at the threats from extreme weather events, like flooding, storms, high winds and driving rain, as well as changes caused by gradual changes in the weather,” she says. “Then it will be about managing our response to these changing patterns.”

According to Beatrice Kelly, “climate change is making us think about what to do if sites become damaged or inaccessible. Should we rebuild them or re-create them? In the future we might have to look at alternative ways of accessing our heritage sites.”

Weather has always played a part in how tourists behave: on hot days visitors spend more time inside country houses than walking in their gardens, according to the National Trust, in the UK; and the US National Park Service says that it sees more visitors in warmer weather – but only until temperatures hit 25 degrees: visitor numbers then drop significantly.

Now the United Nations is warning that “disaster preparedness and management” will become increasingly important for every destination “as climate-related disasters worsen”.

The authors of ‘World Heritage and Tourism in a Changing Climate’ also say that hotels, resorts, harbours and airports in vulnerable areas “could become stranded assets”.

Unesco has produced a guide to help world heritage site managers understand how climate change will affect visitor numbers, and how best to adapt to it.