CCTV images of dumpers for use in more litter blackspots 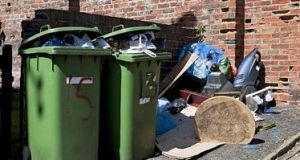 Some rubbish is making it into the appropriate bins - but of a lot of it is not, in certain areas, and is casually being dumped. File photograph: Getty Images

More of Dublin’s litter louts are to be exposed publicly following the city council’s decision to expand its use of CCTV images of people dumping their rubbish on the streets.

The council earlier this month erected a poster in a litter black spot in the north inner city showing 12 people caught on CCTV dumping rubbish.

Within days, the Data Protection Commissioner contacted the council questioning its use of the images.

The council’s head of waste management, Declan Wallace, said illegal dumpers were “just bad citizens” and he saw no difficulty in exposing them. The council plans to keep the poster in place and extend the successful campaign to more litter black spots in the city.

The poster has been bolted to a wall behind a Perspex shield at Frankfort Cottages, near the Five Lamps.

CCTV cameras installed a number of weeks previously had some effect in reducing dumping, but within a day of the poster going up the street was clear.

The poster shows people dumping refuse sacks and smaller supermarket bags, as well as a woman dumping a suitcase and two young men dumping a sofa. The faces are slightly blurred, due to the quality of the footage, but they would be able to identify themselves, as most likely would their neighbours, the council said.

The Data Protection Commissioner’s letter asked the council to justify its use of the images.

It said the processing of personal data must be done fairly, demonstrate proportionality and not be overly prejudicial to the right to data privacy.

Senior council official Eileen Gleeson told the council’s environment committee: “We believe we are not in breach of any data-protection legislation.”