Can science explain why seagulls have become more aggressive? 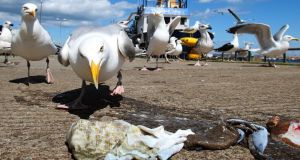 Senator Ned O’Sullivan was roundly mocked recently after he said seagulls “had lost the run of themselves” but the scientific evidence indicates he has a point.

In Britain a number of local authorities have begun to take action following increasingly aggressive attacks by gulls in seaside towns and cities.

This week, in a bid to deter gulls, litter wardens in Plymouth were ordered to issue on- the-spot fines to anyone who drops litter in the Devon city.

There is evidence that the birds are becoming particularly aggressive after they dine on flying ants, leading to claims that the birds are effectively drunk.It is believed formic acid in the ants’ bodies could be reacting in the birds’ stomachs.

“Some of the slightly odd behaviour we are seeing could be as a result of these ants – it could leave the gulls slightly drunk, said Rebecca Nesbit of the Society of Biology.

“However, correlation does not mean causation. It could just be chance that ‘delirious gulls’ are being sighted at the same time as flying ants, or it could be that the weather conditions chosen by the ants are causing this behaviour in the gulls.”

Cornwall council has said it is up to people to change their habits.

“Part of the problem is people discarding food waste and not putting it in the bin. This encourages the aggressive behaviour,” said Rebecca Kirk, the council’s assistant head of public health and protection.

Fearing the situation may be getting worse with every new generation of gulls, she warned that young gulls copy aggressive behaviour of their parents when they see that it works: “Feeding seagulls encourages [them].”

Gulls may have become more visible in urban areas but the reality is that numbers are falling, says Peter Rock, who has studied gulls.

The urbanisation of gulls started in the 1940s when they realised that changing habits among people – more rubbish – meant food became easier to find in towns and cities.

Herring and lesser black- backed gulls particularly favour life in towns – the former nests on roofs, while the latter opts for larger roofs, such as those of warehouses.

Rejecting “lethal action”, the Royal Society for the Protection of Birds says rubbish should not be put outside in plastic bags or put out the night before collection. Gulls should never be fed intentionally or unintentionally, particularly in your garden, said Tony Whitehead of the society.

“They are expert scavengers. Feeding them or discarding food reinforces their belief that all humans provide an easy food source and reduces their natural wariness of humans,” he said.