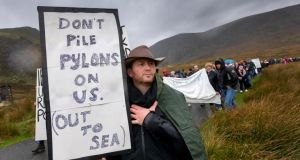 The cost of putting EirGrid power lines underground would be three times the cost of using surface pylons and would lead to an estimated 3 per cent increase in household electricity bills for the next 50 years, the Commission for Energy Regulation (CER) has said.

The EirGrid plan, consisting of three schemes to update Ireland’s electricity network, has proven controversial, with communities urging the energy provider to bury the lines and ease concerns surrounding health and visual disruption.

However, addressing an Oireachtas Committee on Communications yesterday, CER chairman Dermot Nolan said the difference in cost would be about €2.1 billion.

He said the CER had to approve the capital expenditure but EirGrid had not made any submission on the basis of an underground alternative.

The three-to-one ratio estimate arose from a previously-commissioned government report.

The CER also pointed to a potential for “security of supply risk” in relation to underground cables as line faults could take longer to repair.

The committee was convened to discuss the general issue of price increases in energy. Commissioner Paul McGowan said there was a trend across Europe towards a rise in electricity prices.

He said that while Ireland fell broadly in line with this, both our domestic and industrial rates were higher than the EU average.