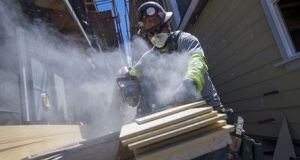 New homes: First-time buyers will be entitled to an income tax rebate of up to €20,000, to fund their deposit. File photograph: Getty Images

First-time buyers of new homes will be entitled to an income tax rebate of up to €20,000, to fund their deposit under a new help-to-buy-scheme.

The scheme will provide a rebate of income tax, paid over the four years prior to buying, to a maximum of 5 per cent of the purchase price of a new home valued at up to €400,000.

No rebate will be available for homes costing more than €600,000.

The rebate will apply to people buying homes newly built by developers and people building one-off houses, and no relief will be given to those buying second-hand houses.

It is a rebate of income tax paid in Ireland – so if a returning emigrant paid income tax here within the last four tax years, they may be eligible for a contribution towards their deposit.

An individual also does not have to have been working consistently – any and all income tax paid in the last four tax years will be taken into account.

The well-flagged incentive will be available to buyers who signed contracts to buy on or after July 19th. In the case of a self-build, applicants who drew down the first tranche of their mortgage on or after July 19th will also be eligible. This scheme will run until the end of 2019 and is expected to cost €50 million.

Minister for Finance Michael Noonan said the measure would serve to increase the supply of new housing, which remains extremely low, with fewer than 10,000 homes built across the State up to the beginning of last month.

“In all markets, supply increases to meet demand and the help-to-buy scheme will increase the demand for newly built houses by assisting first-time buyers to put a deposit together. I expect the building industry to meet this additional demand by increasing the supply of new affordable homes,” he said.

No measures have been included for workers renting homes, but for their landlords, 80 per cent of mortgage interest payments will be tax deductible, up from the current 75 per cent.

Landlords will also be included in the Living City Initiative, designed to encourage the renovation and reuse of pre-1915 city centre properties. Restrictions on the floor size of those properties have also been removed.

For homeowners, the home renovation tax relief scheme will be extended to 2018, and the rent-a-room tax exemption ceiling will be increased from €12,000 to €14,000.

The Irish Planning Institute welcomed the expansion of the Living City Initiative but said it risked “being undermined by the decision to focus the help-to-buy scheme for first time buyers on new-build homes”.

The Construction Industry Federation welcomed the first-time-buyer measure, but said more money needed to be invested in infrastructure, such as sewage pipes and roads, to make housing estate construction viable.

The Residential landlords Association of Ireland described the tax changed for landlords as “disappointingly minuscule”.