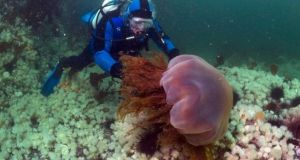 Bathers have been advised to avoid swimming in the water at Dollymount Strand and along the port side of North Bull Wall in north Dublin after a dangerous jellyfish was spotted in the area.

Dublin City Council issued the warning when the lion’s mane jellyfish was seen in nearby waters. It is the second time in less than a week that the jellyfish has been spotted near a beach in the capital. The same species was discovered near Sandycove last week. It has also been reported on beaches in Portmarnock, Malahide, Sutton and Bettystown.

“Bathers are advised not to enter the water due to the presence of these jellyfish, whose sting can be dangerous and cause serious symptoms, including nausea, vomiting and respiratory distress,” the council said.

The lion’s mane jellyfish is one of the largest jellyfish in the world and can grow to over two metres wide with tentacles of up to 60 metres in length. The mouth of the jellyfish can be found under its bell-shaped body and it also produces its own light, making it glow in dark waters.

The jellyfish have hundreds of long hair-like tentacles and can give bathers a very severe sting. The sting can produce blisters, irritation, muscular cramp and may even affect respiratory and heart function.

Seventeen of the jellyfish were removed by the council from Sandycove Beach in August 2014.

Irish Water Safety has called on members of the public to report the sightings of the jellyfish to their relevant local authority water safety development officer.

How do you treat jellyfish stings?

- First of all, you should not pee on the jellyfish sting. The Scientific American finally busted the myth, spread by that 1997 scene on a beach in Friends, that urine eases the pain of the sting. In fact, urine can sometimes cause the sting to burn more, not less.

- Remove any attached tentacles with a gloved hand, stick, or towel (none of these available use the tips of your fingers)

- Rinse the affected area with sea-water (do not use fresh water, vinegar, alcohol or urine)

- Ensure you don’t get stung yourself when aiding others

- Seek medical attention if there is anything other than minor discomfort

- If the patient is suffering from swelling, breathing difficulties, palpitation or chest tightness then transfer to the nearest emergency department urgently