Company prepares to convert from peat production to renewable energy 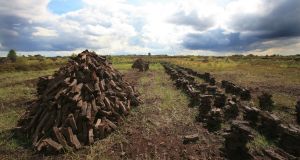 Bord na Móna will stop harvesting peat and will complete its move to a sustainable business within 15 years. Photograph: Eamonn Farrell/RollingNews.ie 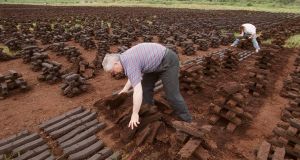 Stacking turf to dry on a bog outside Portarlington. File photograph: Alan Betson /The Irish Times 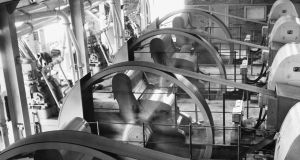 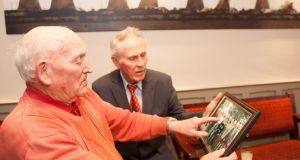 When Gabriel Claffey joined Bord na Móna 60 years ago, he couldn’t have been happier. Just out of school, the 17-year-old from Ferbane, Co Offaly, got a job close to home as the first apprentice fitter at the semi-State’s recently opened workshop for the Blackwater Group; 20,000 acres of peatland that stretches across counties Offaly, Galway, Westmeath and Longford.

One of the young Irish State’s first industrial successes, Bord na Móna was established in 1946 to produce peat fuel for the Electricity Supply Board’s growing network of power stations, most of which were near the bogs in Offaly and neighbouring counties.

The labour-intensive peat industry created employment on an unprecedented scale and ushered in a period of prosperity in its Bog of Allen heartland that lasted into the early 1990s.

For young men in Ferbane and the surrounding villages, landing a permanent position with “the bord”, as locals call it, brought job security and a guaranteed pension, rare in 1950s Ireland. It also offered the chance of advancement. Claffey rose through the ranks and, by the time he took voluntary redundancy in 1998, he was maintenance manager for the Blackwater area and had 74 fitters working under him.

“I was the first apprentice into Blackwater, there were only two fitters in it,” he says. “It was absolutely brilliant, I got great job satisfaction. It came very natural to me. I’m not boasting but I’m very good with my hands. I loved the job. It was a challenge every day.”

At a time when the rest of the country was exporting its young to England and America, Ferbane and the neighbouring villages had more jobs than people.

Tom Murtagh (85) worked for Bord na Móna’s accounts section from 1950 to 1990. He was transferred to the Derrinlough briquette factory outside Ferbane in 1965 and remembers that when it came to harvesting the turf in the summer, it was all hands on deck.

“Families, ladies and all sorts of people were working with the board at that time,” says Murtagh. “A man could bring his family to help him at footing the turf – stacking it to dry – sometimes it was turned by hand and again families were used, all ages. Now, they might only be registered as one person that might have had five or six people helping him.”

Bord na Móna was “very good”, to the people of Ferbane, Claffey says, and among men and women of his vintage the ties are still strong.

“Back years ago, the loyalty of the workers was unreal. You could imagine going out to drain the bog, how wet it was and the bad conditions. Yet people were happy, it was a whole new thing to them,” he says. “They had money in their pockets. We had a solid wage every week and we hardly noticed the recession in the 1980s.”

Last week, Bord na Móna announced it was ending peat production in 2030 and focusing on renewable energy. The men said the news didn’t come as a surprise in Ferbane as people know the peat is running out.

The number of people employed by Bord na Móna has fallen steadily in recent decades, due to a number of factors including the decline in peat reserves, improved mechanisation, and lower oil prices.

Today’s workers do not have the same affection for their employer as previous generations. One fitter, who spoke on condition of anonymity, said staff morale had never been as low. Proposed cuts to wages and worker numbers have led to a dispute between unions and management that is due before the Labour Court later this month.

“Lads are realistic to know that the bog won’t last forever but it’s the style in which the situation is managed. People have given their lives for the company and there has been very little discussions with them about these changes.

“The likes of wind farms and biomass may be cash cows for the company, but there will be relatively little employment.”

The once-mighty peat industry acted as a bulwark against previous recessions, but times have changed for Ferbane. With its vacant units and derelict buildings, it is now like every other rural town hit by the recession.

Ferbane native Eamon Dooley is Cathaoirleach of Offaly County Council. He joined Bord na Móna as a 17-year-old in 1970 and is coming near retirement. The second of three generations of the Dooleys to work for the organisation, he says the “impact Bord na Móna has had on this area can’t be overstated”.

Before Bord na Móna was established Ferbane’s population was 301, he says. “Today, it’s five times that. There was nothing in this neck of the woods, it was a wasteland.”

“There has been a lot of work in tourism development in recent years in Offaly with things like the Lough Boora Discovery Park but it’s hard to see how villages like Ferbane will survive on tourism alone,” he says.

“The challenge for me as a local politician and for our TDs is to look at ways we can replace these jobs. I’m sure, though, we are resilient enough around here to find a way.”