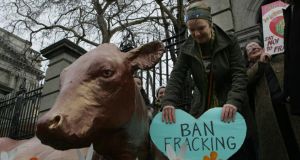 Residents from Leitrim protesting outside the Dáil in 2012 against fracking in their area. Photograph: Cyril Byrne/The Irish Times.

A Leitrim-based anti-fracking organisation has called on landowners to consider refusing access to the Dublin Institute for Advanced Studies (DIAS) for a survey which “could facilitate the introduction of fracking into Ireland”.

Chris Bean, a professor of geophysics at the DIAS, said it was “off the wall to suggest that we are trying to develop fracking through the back door”.

But campaigners have appealed to the Minister for Energy Alex White to consider their concerns.

Eddie Mitchell, a spokesman for Love Leitrim, said the Science Foundation of Ireland-funded survey in the Northwest Carboniferous Basin (which includes Fermanagh, Cavan and Leitrim) was using equipment widely used for oil and gas exploration.

He said that they had initially been told that the DIAS project was about carbon capture and sequestration, but the institute was now saying that the purpose of the survey was to evaluate geophysical imaging techniques.

Prof Bean said that the concerns raised by Love Leitrim were completely off the mark. “This has nothing to do with fracking,” he said.

The project was designed to develop imaging methods beneath the earth’s surface, a methodology which could be used for carbon storage and sequestration in other countries, he added. Prof Bean said the institute was an academic body which had no links with the fracking industry.

Mr Mitchell said there had been no consultation about the testing and he said that in the week when the Cabinet is meeting in Lissadell House in Co Sligo, the Government should be mindful of the views of the community.

‘It is up to us as a community to be vigilant,” he added.

“We would never tell people what to do but we are asking farmers and land owners to consider not letting these people in. Likewise we call on our local and national representatives who are meeting on our doorstep to halt this continuous onslaught on our communities.”

Prof Bean said to date they had been surveying in Fermanagh only, and it was possible they might not be going to Leitrim and Cavan. “We have not gone anywhere without the permission of landowners,” he said.

But Mr Mitchell was not reassured. “This is about mapping our underground rock. It is illegal to do prospecting without the Minister’s permission and these are the tools used for prospecting.”