Another Life: The ‘perfect’ supermarket tomato, designed by computer 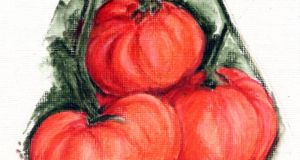 The first of our home-grown summer tomatoes bursts in the mouth with a revelation of flavour that pushes the months of supermarket lookalikes safely out of mind. It is a golden cherry (‘Sungold’, indeed), small between finger and thumb but still several times the size of the berries of the wild tomatoes that sprawl in the valleys of the Andes. Their fruits are beak-sized for the birds, to aid the widest spread of their seeds.

Beyond ‘Sungold’ in the polytunnel is a dense, unruly thicket of a Mediterranean beefsteak, ‘Pantano Romanesco’, still fattening up the gloriously obese and richly flavoured fruits of my drawing.

The breeding of tomatoes has short-changed the consumer when driven by demands of long shelf life, cloned appearance and tough skin – as well as by a severing from the plant for gas treatment at the first faint blush of ripening. All these together with maximum crop yield from hydroponic nourishment, a highly developed resistance to disease, and plants with shapes fitted to machines.

But the tomato began changing from the first prehistoric domestication in South America and was certainly much bigger when first taken to Europe, probably from Mexico. By the mid 15th century the “golden apple” was already being eaten in Italy, with oil, salt and pepper.

Early European worries about the tomato’s botanical affinity with some poisonous members of the Solanaceae family – deadly nightshade or the thorn apple – were quick to dissolve. Among thousands of other Solanaceae species, after all, are potatoes, peppers and aubergines.

And from long usage of the botanical name Lycopersicon esculentum (edible wolf peach), the tomato has now been outed as Solanum lycopersicon, which keeps the hint of an aphrodisiacal fruit.

It’s estimated that, given the tomato’s early transport to Europe (and back again to North America), with inbred mutations from a limited original stock, modern tomato cultivars have only a fraction of the genetic variation of their wild relatives.

Two Dutch plant geneticists, Yuling Bail and Pim Lindhout, have suggested, in a detailed review in Annals of Botany, that no breeder went back to South America’s wild tomato germ plasm until about 1940.

This was when Charles Rick, a university geneticist from California and world authority on tomato biology, began gathering hundreds of wild species. He waded through Colombian swamps, trekked the Andean heights and found salt-resistant plants on the shores of the Galapagos Islands. Breeding crosses between wild and cultivated species, wrote the Dutch authors, he “generated a wild array of novel genetic variation”.

The traditional breeding of the 18th and 19th centuries produced tomato cultivars whose seeds could be saved from one season to the next and sown again, the so-called open-pollinated varieties. These were inherited within families or communities and have become the “heirloom” tomatoes, such as ‘Pantano Romanesco’, prized today for their rich and distinctive flavours.

The supermarket tomato, however, is invariably a hybrid, bred from crossing two parents: sowing the seeds from the fruit will have unpredictable results. A dozen breeding companies dominate the global seed market, now worth some €500 million, and compete in genetic improvements to help commercial growers, and to provide consumers with novelties in size, shape, colour and health appeal.

Heirloom varieties may still taste the best, but their yields are low for commercial needs, their growth habits are unruly and they are notoriously prone to fungal and viral disease. After breeding for healthier plants, the priorities, as listed in the Dutch review, were “for yield in the 1970s, for shelf life in the 1980s, for taste in the 1990s and for nutritional quality currently”.

The commercial need for firm fruit, long shelf life and controlled ripening off the plant took breeding into the realms of genetic modification. The first transgenic tomato, Flavr-Savr, appeared in 1994, and while American consumers welcomed the idea, those in Europe did not. Production problems tipped the cultivar into failure.

Release of transgenic tomatoes came to a complete halt at the end of the 20th century. This was partly from Europe’s resistance to GM foods but also because the tomato’s molecular make-up is too complex to show profit from changing a single genetic trait.

Shop tomatoes, however “vine-ripened”, have been prompted into their deepening colour and production of lycopene – the fruit’s health-promoting antioxidant – by off-plant applications of ethylene gas, the plant’s natural ripening hormone.

Flavour is the big remaining challenge to breeders. It depends on interaction of sugars and acids, which can be intensified genetically, but also on some 30 volatile compounds that await the same degree of manipulation. Sequencing the genome of Solanum lycopersicum, recently completed in a research project, will help identify more useful genes in wild tomato germ plasm.

Whatever this does to Europe’s acceptance of GM food, it seems that breeding the perfect supermarket tomato will be shifted even farther from the field, to design by computer.