Another Life: Could tourism tame or terrorise the wild Atlantic chough?

A reader’s report made me uneasy: choughs are deliciously wilful and wild; shall we see them tamed into pigeons by the Wild Atlantic Way? 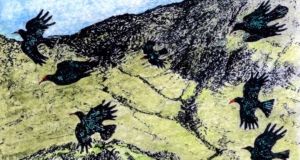 The first really silent morning of autumn has an unmistakable quality, as if pausing for nature to change gears. It was best felt, of course, early on a Sunday, with no one yet stirring for Mass, the ocean empty, the mountain blocking any rumbles from the east. Above all, not one engine, nor any whisper of wind.

I was standing beside the rain gauge, listening through my skin, when little tremors in the air and a first, chiming tsee-ow! proclaimed a close visitation of choughs. Among them were, probably, young birds fledged from nests on Frehill, the little twin-humped island so far offshore and jaggedly cliffed that I have never sought to explore it.

Half a dozen scarlet bills jabbed briefly into the hillside turf before the little flock bowled on. They might have done better, it seems, down at Mizen Head visitor centre, in west Cork, where a reader, Greg Carley from Killiney, last month watched a party of choughs pecking at food scraps beside the picnic tables. His report made me uneasy: choughs are deliciously wilful and wild; shall we see them tamed into pigeons by the Wild Atlantic Way?

Mizen Head, as it happens, is Ireland’s hot spot for a bird now increasingly rare in Europe. It has at least 30 pairs of choughs, ahead even of the number at Valentia Island or the cliffs of the Dingle peninsula. The whole Irish population has remained fairly steady at about 2,400 birds, and the distribution map at Biodiversity Ireland shows a spread of Pyrrhocorax pyrrhocorax along most of the Atlantic coast, from Co Waterford to Co Antrim’s Rathlin Island.

That compares most happily with the bird’s severe decline on the coasts of western Europe, leaving small and isolated populations. There was recent near-extinction even in Northern Ireland. In 2012, for the first time, a pair bred in the RSPB nature reserve on Rathlin; unlike the few visiting choughs of previous years, they have stayed feeding throughout the winter.

Their nearest relatives are across the water on the islands of Islay and Colonsay, with the last choughs breeding in Scotland. The decline has been dramatic: 39 breeding pairs on Islay in 2013, compared with 95 pairs in 1986. Local conservationists and scientists from Aberdeen University found a poor survival of the birds through their postfledging years. Helped by local farmers, they have put out extra snacks of mealworms at the birds’ preroost feeding grounds.

The red-billed crows of the coasts (there are others, mountain birds with yellow bills) spread right across the Old World, from the Atlantic to the Pacific. But intensification of agriculture and coastal development has used up most of the wind-shorn, well-grazed coastal grassland they probe for insect food.

In Britain the second World War brought ploughing right to the fringes of the cliffs. Cornwall, once so abundant in choughs that they feature on the county coat of arms, lost them as breeding birds in 1947 and didn’t get them back, probably from Brittany, until 2001. Within a decade, nest protection and habitat management had encouraged half a dozen pairs to rear 15 young.

Across the English Channel at Ouessant, a small and highly protected island 20km west of Brittany, tourists on day trips have reached more than 150,000 a year, most of them walking the cliff tops that hold the island’s little flocks of choughs, a last core population for northwestern France. This has repeatedly scared them into flight, severely reduced their feeding and increased the mortality of the young. Such impacts, peaking in August, mean that their “short-term viability is endangered”.

Choughs are a big ecotourist attraction of our Wild Atlantic Way, so the French study and its recommendations are worth attention. (It appeared in the Journal of Applied Ecology in June 2009.)

Declines in choughs noted on much-visited islands such as Clear (more commonly known as Cape Clear) and Aran have so far been blamed on reductions in livestock grazing.

Warmly recommended for television viewing next week is an intriguing, beautiful and often sadly moving Irish documentary film set on the island of Inishbofinne, in Co Donegal. The Stranger , which is on RTÉ One on Thursday, at 10.15 pm, and is directed by Neasa Ní Chianáin, is about a well-educated, good-looking, artistically gifted young Englishman, Neal McGregor, who lived on the island as a hermit for eight years in the 1980s.

His motivation remained a mystery, even to close friends in Britain, and he became the target of deep suspicion. Was he a British spy, looking out for smuggled Provo arms ? His deeper attention, revealed in his diaries, actually lay with the island’s birds, which came to fill the pages with field notes and bright little paintings.

“Choughs in the wind,” as he jotted one April day, “assume shapes that are very unbirdlike.” Humans of his nature can seem quite exceptional, too.