Another Life: Control of bird habitats in hedges and on hills remains a burning issue 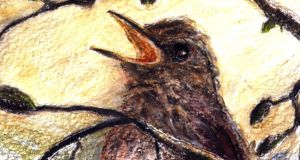 Now that most of the berries have gone, the hedges of the west can look pretty bleak, and a wind-tossed hawthorn can scrawl sad and jagged shapes upon the sky. But there’s colour if you’re mindful of it: the warm russet of fuchsia, the deep purples tucked into willows, an occasional fiery blaze from willows bred with golden twigs.

Before Christmas, Storm Brigid shook out the nests of finches – green, gold and chaff. Some are still so perfect that one wants to bring them indoors: exquisite, feather-light cups of woven moss with a lining of softest sheep’s wool (and sometimes, I trust, a few brushings from my own hair, freshly washed and silvery and floated out of the window for that purpose.)

The nests would never be used again, except, perhaps, by passing woodmice in winter. And that’s just as well, since the county council’s cutting machine came by in early December and seized upon our own roadside fuchsia with an horrendous rasping and clattering. The attack was well warranted and even welcome, since the hedge had got beyond my care and was playing tricks with sight round the curve in the road.

Among the 102 commitments in Actions for Biodiversity 2011-2016, promised when Jimmy Deenihan was heritage minister were reviews of the legal controls on hedge- cutting and hill-burning. The closed period for both is between March 1st and August 31st and there has been strong pressure for changes or concessions. The new Minister, Heather Humphreys, catching up on things, has been inviting submissions from “stakeholders” and the public.

These have to be with her no later than Friday next, January 9th (email nature. conservation@ahg.gov.ie with “Review of Section 40” as the subject). The Heritage Council, urging people to “have your say”, has quoted fears of a blanket exemption for roadside cutting all year round. How bad would this be?

The public consultation document (at npws.ie/legislationandconventions/public consultation section 40.pdf) is a good one, putting the questions but soundly on the side of wildlife. Controls on cutting and burning, as it says, are not just about protecting nesting birds, either in hedges or on the ground, “but a range of biodiversity that contributes to food chains and wider ecosystems”. Roadside hedges help to make up for our shortage of broadleaf woodland.

In setting the limits for cutting, the Wildlife Acts make specific provision for “health and safety” exemptions for landowners and county councils. Every summer brings complaints that bristling hedges have imperilled the cyclists and motorists on minor country roads, and others that cutting machines are out when they shouldn’t be.

Last month’s typically vigorous debate by Kerry County Council, a “stakeholder” in these matters, was marked by a colourful assay in Hiberno-English from Cllr Danny Healy-Rae. No bird, he claimed, would be “foolish enough to build her nest where she’d be blown to pieces and the feathers blown off her and she to be left standing naked in the road” – a flourish fit for notice in his late’s father’s famous “wide earthly world”.

Landowners argue that since birds have generally left their nests by the end of July, they should have the power to cut roadside hedges after that. The trend to earlier nesting as climate change brings earlier springs may seem to strengthen the point. But the present cutting dates could also threaten birds that start nesting in February.

When it comes to hill-burning, Kerry might remember 2010, when for two exceptionally dry months of early spring it was one of several counties where major gorse fires threatened forests, houses and even the local hospital in Dingle. Burning heather is an age-old hill-farming measure, providing extra nutrients for grass growth. But fiercely flammable gorse is spreading and setting fire to it has also become a sport for young and mobile urban vandals.

The sheep farmers of Wicklow, through the Wicklow Uplands Council, have called for extending controlled burning through March into April – the “traditional burning period” – citing the longer seasons already allowed in Scotland, Northern Ireland and Wales. Like those in the west they argue that the commonage is often still too wet to burn before March begins.

BirdWatch Ireland wants a halt by at least St Patrick’s Day, to protect the ground-nesting birds, but burning, both of heather and scrubland, takes an even wider toll – of invertebrates, amphibians and less resilient plants.

The Wicklow Uplands Council, commendably sensitive to the many demands on the hills – ecological, agricultural, recreational – produced a report in 2013, by ecologist Dr Mary Tubridy. It made the case for controlled burning of scientifically assessed areas as part of closer, partnered management of the Wicklow uplands. Its detail and scope are bound to count with the Minister as she tries to frame new rules, – or is persuaded to settle for the old ones.