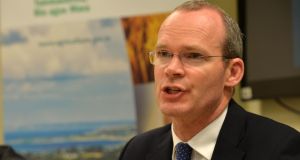 Minister for Agriculture Simon Coveney: a spokeswoman for his department said the amendments made “were processed in full accordance with the regulatory and legislative process in place”. Photograph: Alan Betson/The Irish Times

The Department of Agriculture has rejected criticism from An Taisce that its decision to reallocate environmental funds would have a negative effect on vulnerable wildlife.

The environmental watchdog has written to the European Commission querying the legality of the reallocation of funds under the 2007-2013 rural development programme. Some €528 million was allocated to the Natura measure which provides for compensation to farmers for measures taken to protect habitats, wild birds and water quality. However, only €95 million was spent and the remainder was reallocated to other environmental measures.

Doireann Ní Cheallaigh of An Taisce’s natural environment office said the proposed reallocation of more than €400 million should have been assessed under the EU’s habitats directive.

“It must have been clear to the Department of Agriculture that this reallocation of funds would have a significant impact on the environment, yet the public was not consulted before the decision was taken, in breach of the Aarhus Convention,” she said.

“These are some of the issues we have raised with the European Commission. If necessary, the next step will be a formal complaint to the European Court of Auditors.”

However, a spokeswoman for the Department of Agriculture said that while €528 million was allocated to Natura 2000 in the last programme, participation was voluntary and demand from farmers was “significantly less” than had been provided for.

“Therefore, the financial provision for Natura was revised to reflect the actual spend,” she said. This involved the reallocation of funds across the agri-environment and less-favoured areas schemes, without changing the overall spend on environmental measures.

The spokeswoman said the amendments made “were processed in full accordance with the regulatory and legislative process in place”.

She said €293.5 million was distributed to farmers in Natura areas when the agri-environment scheme known as REPS was taken into account.

The spokeswoman added that farmers with Natura land will be guaranteed access to the first tier of the new agri-environment scheme known as Glas. Under the new scheme, farmers will receive up to €375 per hectare for protecting and enhancing the habitats for endangered farm birds.