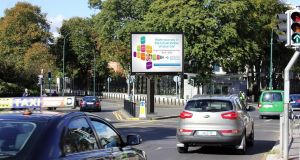 Computer generated image of proposed sign outside US Embassy on Pembroke Road, Dublin 4 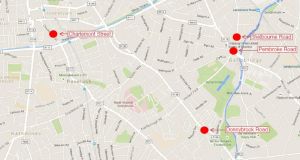 Four commercial advertising screens, more than three metres wide and almost six metres tall, are to be erected in the southeast of Dublin city as part of the Dublin Bikes arrangement.

Sites at Donnybrook Road, Shelbourne Road, Pembroke Road and Charlemont Street have been chosen for the screens to fulfil Dublin City Council’s side of the Dublin Bikes deal with advertiser JC Decaux.

The council said that if it did not allow the new structures the bike rental scheme could suffer a reduction in service.

In 2006 the council signed a contract with JC Decaux, one of the world’s largest outdoor advertising companies, for a bike rental scheme, public toilets, maps and signposts. In exchange the company would have the right to advertising space at a number of locations around the city.

The original tender was for 120 structures and 450 bikes, but following an appeal to An Bord Pleanála the number of advertising panels was reduced to 72. To retain all the bikes, the toilets were taken out of the deal.

The bike service began operating in 2009 and was extended in 2010 by 100 bikes. To fund the extension the council agreed to 10 additional advertising screens, six of which have been installed but four of which remain outstanding.

The council’s planning department said it had assessed 50 sites in order to find locations that were commercially viable, accessible for servicing lorries and not constrained by underground utilities or planned developments.

Councillors will today be asked to approve the four suitable sites.

“Failure to provide the outstanding advertising structures can result in a service reduction of the bike scheme and related amenities,” the planning department said.

The four new screens would be mounted on poles and range in height from almost 5.5m to just over 5.8m, with a maximum width of just under 3.8m.

Separately, the council plans to expand the scheme into the suburbs at a cost of €100 million over a 10-year period through a new advertising screens contract.

While the new bike stations would be in the suburbs, the advertising would most likely be along busy traffic routes and in the core of the city centre.

Since 2014 the scheme has expanded to a total of 1,500 bikes, with the annual operation costs of the extra bikes funded by subscriptions, Coca-Cola sponsorship and by the council. It wants to increase subscription fees from €20 to €30 to help meet the costs. The €100 million investment would provide another 3,500 bikes.