We need an urgent conversation about the future of education

Opinion: Twin genies of online learning and school-based assessment are out of their bottles and shouldn’t be put back 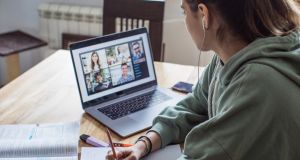 Online education is here to stay – a product of Covid and the necessary embrace of social media to carry out some of the essential aspects of our lives remotely. Photohraph: iStock

On February 9th last, The Irish Times had two stories. The first, quoted a study from the online safety charity CyberSafeKids. Key points noted include that most children aged between eight and 12 have a presence on social media, with almost one in three saying they have friends or followers online who are strangers in real life; minimum age limits intended to restrict access to social media platforms to those over 13 appear to have little or no impact; in a survey of over 2,000 children, 92 per cent, including 89 per cent of nine-year-olds, own a smart device; 82 per cent told researchers they had profiles on social media and messaging apps.

We now know a lot about the internet and social media. We know the many benefits, but we also know the hazards. The latter include the way in which social media can remove for some, even many, people any vestige of self-censorship. They include the capacity of social media to foster extraordinary conspiracies and have people believe, and act on, them. They include the promotion of alternative realities which have no relationship to reality. They include the capacity of social media and its use by those with malign intent to undermine our democratic societies and drive us towards anarchy. The United States provides a recent graphic depiction of all of this. But no country is immune and there is plenty of evidence of similar behaviour by Irish residents.

This then is an aspect of the world that children inhabit and one which is, and will increasingly be, a central aspect of their lives. They don’t need to be taught how to access and use social media – every parent whose children have access to these devices knows that and the survey quoted demonstrates it well. What they do need is to be prepared intellectually and morally for the world that they will interact with. They need to have the capacity to understand the benefits and hazards of social media; to exercise judgement and a constructive scepticism when using it and to understand the consequences of their actions in a social media context.

This is not about “lessons” in social media behaviour – a discrete part of the curriculum taught for so many hours per week. It is about reorienting education so that it better fulfils what is a key function – forming the character of children and equipping them with the competencies and perspectives that, as adults, will help them contribute to society as active, socially engaged and responsible citizens. It is why we need a conversation about education.

The second article had a related story to tell. In it Fintan O’Toole wrote about the disparities in access to digital learning, with children from low-income families unable to afford the laptops necessary to join their virtual school online and the paucity of the government’s response. The implications for increasing inequality, not just in our education system but in society, are glaringly obvious.

It was said that assessment by teachers couldn’t be done. We’ve learned that it can

We need to recognise that on-line education, along with Zoom meetings and virtual conferences, is here to stay – a product of Covid and the necessary embrace of social media to carry out some of the essential aspects of our lives from school to office to family reunions. We cannot tolerate a situation where access to this fundamental right is based on financial resources.

The pandemic has swept away the reluctance to engage meaningfully with on-line and blended teaching and learning. It has been shown to be a viable and effective model, with caveats. Effective forms of blended and on-line teaching and learning that enhance the student experience need very careful development, resourcing and staff training. We need a conversation about education.

The fact that teachers have assessed the performance of their students as a replacement for the Leaving Certificate examination also has implications for our education system in a context beyond the pandemic. Last year we replaced a high-stakes, high pressure test with a sophisticated assessment of the overall performance of students by their teachers. It can’t be an exception. Apart from its damaging effect on the mental health of students, the Leaving Cert with its role as gatekeeper to further and higher education in many ways perpetuates social and economic privilege through access to education resources, for some of the reasons noted by Fintan O’Toole. It was said that assessment by teachers couldn’t be done. We’ve learned that it can.

Much needs to be done in the training of teachers and in ensuring fairness and consistency in marking across all schools before a system of school-based assessment could replace the Leaving Cert. But the twin genies of on-line learning and school-based assessment are out of their respective bottles and shouldn’t be put back. But unless we plan carefully and resource properly, technology will exacerbate the inequalities in our education system and by extension in society. The resulting alienation of a significant number of our fellow citizens would pose very real dangers for them and for our way of life. It is another reason why we need a conversation about education.