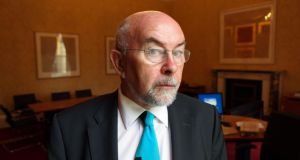 Ruairí Quinn: Minister said new legislation will bring the teaching profession into line with similar regulatory bodies such as the Medical Council or An Bord Altranais.

The power to sanction underperforming teachers and suspend them from their posts will finally be given to the Teaching Council a full 12 years after the legislation proposing it was first introduced.

New laws allowing for the censure of professional misconduct and poor teaching standards are due to come before the Oireachtas and will enable the council to declare a teacher to be deemed “unfit to teach”.

It will bring the teaching profession into line with similar regulatory bodies such as the Medical Council or An Bord Altranais, according to Minister for Education and Skills Ruairí Quinn.

‘Small minority’
“The vast majority of teachers in our classrooms perform well. But for the small minority who do not, I believe that the Teaching Council will now have at its disposal the right tools to deal with cases of serious misconduct and to improve and assist poorly performing teachers,” Mr Quinn said yesterday. Having the sanctions was a way to introduce “accountability and compliance” in the profession, said Don Myers, president of the National Parents Council Post Primary.

“If there were complaints in the past you had nowhere to go,” he said.

The Association of Secondary Teachers Ireland welcomed the Minister’s announcement saying it confirmed the high professional standards of Irish teachers.