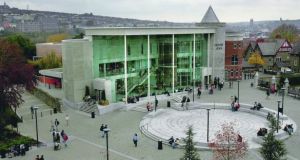 University College Cork has become the third Irish university after Trinity College Dublin and the University of Limerick to receive an Athena Swan award.

The award recognises academic institutions for their commitment to gender equality.

UCC received a bronze Athena Swan award for its efforts to improve the representation of women in higher education, particularly in science, technology, medicine and mathematics which have traditionally been seen as male preserves.

The decision to award UCC the Athena Swan, comes after TCD and UL both received awards in 2015, and follows on from UCC’s drawing up and implementation of a three year action plan by a diverse team led by Prof Caroline Fennell, senior vice president academic and registrar.

“We are very pleased to have earned this award. Gender inequality in senior leadership in higher education is a challenge we face not only in UCC, but across the third-level sector, in Ireland and beyond,” said Prof Fennell.

“This award recognises work underway in UCC to build the right infrastructure to support all members of our academic community, and indeed all our staff, can contribute to their full potential.”

Congratulating Prof Fennell and the steering group, UCC president Dr Michael Murphy said that Athena Swan has allowed UCC to translate values of openness and diversity into “concrete actions that will help us attract and nurture the most talented staff.

“Our senior management is committed to pursuing the Athena SWAN agenda and delivering the commitments set out in our action plan. This is a long-term commitment with some challenges ahead,” said Dr Murphy.

The awarding of the Athena Swan was a recognition of the progress made by UCC in the area of gender equality, said Prof Murphy who paid tribute to Prof Fennell and the university’s Athena Swan steering group for “their hard work and success”.

The announcement comes less than a year after an internal survey among staff in autumn 2015 found significant levels of dissatisfaction over gender issues and the promotion processes at UCC.

Unpublished research by management at UCC found that more than one-third (36 per cent) of the 375 respondents - which comprised 265 females and 110 males - believed the culture and atmosphere at the college was not female-friendly and inclusive.