TUI members will not carry out duties of ASTI colleagues 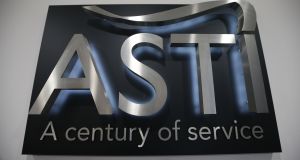 The first of the ASTI’s seven one-day strikes in the dispute is scheduled for next Thursday. It is set to close two out of three of the country’s secondary schools. File photograph: Nick Bradshaw

The Teachers Union of Ireland (TUI) has advised its members not to carry out duties normally performed by colleagues in the Association of Secondary Teachers in Ireland (ASTI) during its forthcoming industrial action.

This will include all teachers as well as school principals and deputy principals.

The TUI executive met on Friday to consider its position regarding the forthcoming ASTI industrial action.

“Members of TUI will not be doing the work of ASTI colleagues who are engaged in industrial action,” TUI president Joanne Irwin said after the meeting.

The first of the ASTI’s seven one-day strikes is due to take place next Thursday. It will close two out of three of the country’s secondary schools.

The management body for the State’s 97 community and comprehensive schools, which met on Thursday, also said many of its schools were set to close. Most of these schools are staffed by members of both the ASTI and TUI.

Secondary schools, meanwhile, have begun informing parents that classes will be cancelled next Thursday due to the industrial action.

Talks are set to resume next week between the ASTI and the Department of Education in an attempt to resolve the dispute over salary levels of secondary school teachers recruited since 2011, as well as financial penalties imposed after the Government deemed the union to have “repudiated” the Lansdowne Road pay deal.

The department has initiated efforts to recruit parents and members of the public as fill-in supervisors. But strict vetting procedures will likely delay the filling of advertised posts until December at the earliest, meaning most existing strike days will not be covered.

Meanwhile, upwards of 1,000 primary and secondary school teachers affiliated with the TUI, the INTO and Impact trade unions will hold a protest outside Government Buildings on the same day as the ASTI strike.

Members will be calling on the Government to implement “equal pay” for teachers when they gather on Molesworth Street from 4.30pm next Thursday.

Speaking to The Irish Times, an INTO

spokesman said next week’s demonstration is not associated with the strike, and had been organised before industrial action was announced for the same day.