Lunchtime demonstrations due across all colleges campuses on Thursday 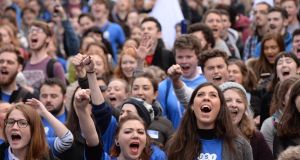 A Union of Students of Ireland (USI) protest over public investment in third level level in 2017. Photograph: Dara Mac Dónaill / The Irish Times

Third level students and lecturers across college campuses are set to stage lunchtime protests on Thursday to highlight what they say is a growing crisis in higher education funding.

State funding for third level fell by almost 40 per cent as a result of austerity-era cost-cutting between 2008 and 2015 at a time of rising student numbers.

While the Government says it has invested millions of euro in extra funding in recent years, campaigners say only a fraction of what was cut has been replaced.

A coalition campaigning for publicly funded education, which is to stage demonstrations at 1pm, has warned there will not be enough college places over the coming years to cope with a demographic bulge.

The coalition - which includes the Union of Students of Ireland, Irish Secondary Students’ Union and trade unions representing teaching staff - says this pressure is set to peak in 2030 with an additional 40,000 students seeking access to third level.

USI president Síona Cahill said lack of investment currently means students and families are shouldering some of the most expensive college charges in Europe.

“Currently, the annual student contribution charge stands at a staggering €3,000. Between the years 2007-2014, this increased by a whopping 363 per cent,” she said.

“The sobering facts for students today is that at €3,000, Ireland will have the highest fees in the EU after Brexit. Meanwhile, Susi grants have not increased for students in line with the cost of living and soaring rents in Ireland today.”

She said protests on Thursday by students and staff across college campuses will send a strong message that “we will not be an easy target for cuts”.

Frank Jones, deputy general secretary of the Irish Federation of University Teachers, called for a review of the current funding policies which are “strangling” higher education.

“While the last budget set aside a billion euro for a new rainy day fund, higher education continues to drown in a sea of underfunding with student numbers on the increase and staffing numbers stagnant,” he said.

The Government has previously said it is committed to investing more for higher education and has pointed to additional allocations.

The 2019 budget, it says, includes a package of €57 million in additional current funding for higher education initiatives alongside €41 million additional funding for pay deals and pensions in the sector.

However, the chair of Fórsa’s education division, Gina O’Brien, said these increases still fall far short of what is needed to address the crisis in the sector.

She said the Cassells report outlined the scale of funding required to build a world-class third level system.

“We set up the coalition to campaign for publicly funded educations and the Cassells report has provided us with a roadmap as to how that can be achieved,” she said.