That’s Maths: While computer simulations are uncertain, they are the best means we have of anticipating future conditions 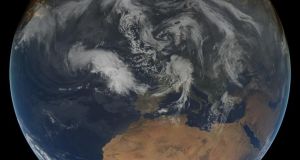 ‘Liffey bursts its banks: St Stephen’s Green flooded again”. This is an improbable but not entirely impossible future headline.

Sea levels are rising steadily, and, if the polar ice caps melt, the results could be catastrophic. The changing climate is now beyond doubt. A vast body of solid scientific evidence shows how human activities, mainly the burning of coal and oil, are warming the Earth.

Of course, there is always room for debate and considered dissent in science. But most of those who try to rebut or discredit the consensus view are lacking objectivity. There are frequent attacks on climate science by groups with vested interests in maintaining the status quo. The resulting confusion is closely analogous to the obfuscation of the link between smoking and cancer stirred up by the tobacco industry.


Computer simulations
The atmosphere is measured and monitored in minute detail by a global observational network, so we have excellent knowledge of what has occurred and what is happening now to the climate. But what of the future? We have no observations for 2050 or 2100. Instead, we must simulate future climate change using computer models of the atmosphere and ocean.

The climate is governed by well-understood physical laws, including Newton’s laws of motion, conservation of mass and energy, and Boyle’s Law relating pressure and volume. The laws are expressed in terms of mathematical equations. These can be solved, starting from today’s climate and including factors such as increasing CO2 which alter the temperature.

The equations are of a type that mathematicians call non-linear partial differential equations. They are reduced to a manageable form by a process called discretisation: we replace continuous fields such as temperature by values at a finite set of points called a computational grid. In essence, this reduces a hard problem in calculus to an easy problem in algebra.

The algebraic problem can be solved using a computer. The number of unknown quantities is vast, and the most powerful computer machinery is required. The result of the calculation is a description of climate variables at a future time. Rising temperatures and rising sea levels are consistently found, although the timescales vary from model to model. The seasonal and regional variations and the patterns of extreme weather events are more problematic, and there are significant disagreements between different simulations.

It is important to recognise that there are substantial uncertainties at every stage. To address these, we run not one but several simulations of future climate. This collection of predictions is called an “ensemble”. The spread of the ensemble gives us an indication of the range of possibilities and a measure of the probability of any particular outcome.


Ignoring scientific reality
Although computer simulations inevitably involve errors, and all climate projections are uncertain, they are the best means we have of anticipating future conditions. To those who deny that they have any validity, I can only urge them to enter into dialogue with the astrological community: both groups ignore scientific reality.


Peter Lynch is professor of meteorology at University College Dublin. He blogs at thatsmaths.com . His book Rambling Round Ireland is now available as an ebook on amazon.com