Archive: On 27th October almost 70% of secondary schools closed across the country as members of the ASTI held a strike in pursuit of equal pay for newly-qualified teachers. Video: Bryan O'Brien

Education Minister Richard Bruton TD has said that there was a substantial deal on offer to ASTI on the issue of pay for more recently qualified teachers, which would see increases of up to 22% for many by January 2018. Video: Bryan O’Brien 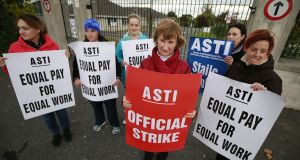 The president of the Association of Secondary Teachers, Ireland (ASTI) has said the union may cooperate with contingency plans to keep schools open after the mid-term break if offered a concession on job security for young teachers.

Ed Byrne said he was “flying a kite” by making the suggestion, saying teachers were concerned about the lack of readiness within schools to deal with the planned withdrawal by ASTI members of participation in supervision and substitution duties from Monday week.

If no progress was made in talks by the end of next week then “maybe we would step in for a short time if we can get some quid pro quo,” Mr Byrne told RTÉ’s News at One.

He said one thing the Department of Education could do would be to give new teachers in the ASTI the benefits introduced under the Ward Report, which would enable them to gain permanent employment and full hours more quickly than before.

These benefits - granting teachers entitlement to a Contract of Indefinite Duration (CID) after two years rather than three - have been extended to the two other teacher unions as part of their voting in favour of the Lansdowne Road deal.

Mr Byrne said extending the Ward report benefits to ASTI members - despite the union’s wish to stay outside of Lansdowne Road - “may be a temporary solution” to deal with the “poor contingency plans”.

However, he stressed, it would not resolve the dispute which has closed 507 schools for the day and threatens an indefinite shut-down from Monday week.

Meanwhile, members of the 2,000-strong Association of Garda Sergeants and Inspectors will begin a second day of limited industrial action on Friday.

They will boycott the Garda IT system and refuse to carry out some administrative duties.

The association said its negotiators were currently in talks with Government officials, but no agreement had been reached. It said that, as a result, the planned industrial action would take place as scheduled.

The executive of the Garda Representative Association met on Thursday to consider recent contacts with the Government, but no statement was issued afterwards. It is to hold further talks with the Department of Justice on Friday.

As the first day of the teachers’ strike campaign began, the ASTI accused the department of being “extremely provocative” by announcing it would withdraw payments for supervision and substitution duties for the duration of the industrial action.

Responding to such criticism, Minister for Education Richard Bruton said the payment would be reintroduced for striking teachers if they agreed to resume working additional unpaid hours which were in place across the public service.

The Minister said the ASTI had decided unilaterally to cease working these additional hours - known as the Croke Park hours - and that this had led to the current row over supervision and substitution payments.

Speaking to reporters in Dublin on Thursday, Mr Bruton said he was disappointed for students and parents at the disruption to schools as a result of the industrial action by the ASTI.

He said a very substantial deal had been negotiated with other teaching unions, the TUI and INTO, in relation to new entrant pay. He said this would see increases of up to 22 per cent for many by January 2018.

Mr Bruton said the pay gap between recently-recruited teachers and those appointed before 2011 had been closed “by virtually three quarters” as a result of the deal reached with the other unions.

However, he said this had not been forthcoming and school authorities did not have the time necessary to recruit external personnel to do this work or to have them vetted by gardaí.

“If the ASTI continue to work the 33 Croke Park hours from which they unilaterally withdrew, we will immediately pay supervision and substitution and get back on track and seek to extend benefits to members of ASTI ,” Mr Bruton said.

Asked whether he supported the principle of equal pay for equal work - the issue at the heart of the ASTI’s campaign against lower pay for recently entrants - the Minister said he did “in the abstract” and that everything the Government did was about equality.

Mr Bruton said the Government had strived to keep schools open and would be sitting down again with the ASTI in an attempt to find a resolution.

Tánaiste Frances Fitzgerald called on the teachers to reconsider their industrial action.

Ms Fitzgerald said in the Dáil on Thursday that the Government wanted to do everything to avoid any further disruption in schools.

Fianna Fáil TD Dara Calleary said it was another industrial relations shambles under the Government’s watch. “We have been saying for weeks you should seize the initiative and prevent this strike by teachers,’’ he added.

He said at the beginning of the week the ASTI had asked for an assurance from the Government that teachers would receive an equality of treatment in pay.

“This is a relatively reasonable request, one would imagine, and it would have reassured the ASTI you have an interest in resolving the dispute,’’ Mr Calleary added.

Speaking on Thursday morning, ASTI’s general secretary Kieran Christie said there was a “substantial gap” between the union and the department on the subject of pay for new entrant teachers.

“They appear to be taking a hardline stance. Is this a Government position that is going to be embedded infinitum?” he said on RTÉ’s Morning Ireland.

“We will fight this through the courts,” he said. “We believe we’re not on strike if we turn up to do duties and should be paid.”

Paul Mooney, president of the National Parents’ Council, said the rights of students were just as important as those of teachers.

He warned that the ASTI action could have a “life-long” effect on students as some might have to repeat the Leaving Cert if they cannot complete the syllabus for subjects such as maths.

“We are concerned about children and their careers. If schools days are lost it will have a knock-on effect,” he said.

Mr Mooney also said it was just not feasible for parents to take over supervision duties within the short time scale and that it would take at least ten weeks to organise screening and clearance.