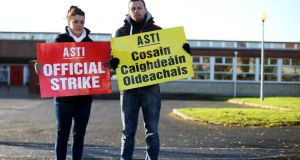 Minister for Education Jan O’Sullivan has said there will be no further movement from her Department on Junior Cert reform following fresh threats of strike action from teachers’ unions.

“We can’t have the veto that’s there at the moment whereby there’s a refusal to have any assessment by classroom teachers,” said Ms O’Sullivan, who was speaking at an event marking the completion of the Government’s €30 million broadband rollout scheme in post-primary schools nationwide.

“I have significantly moved, particularly in terms of having a State certificate, and some element of a final exam which is 60 per cent . . . I’m not moving anywhere at the moment, they need to move,” said the Minister when asked whether her Department would make further concessions over the proposed continuous assessment requirement for secondary schools.

Despite moving from an initial position of 100 per cent assessment by teachers, representative unions such as the ASTI and TUI remain unhappy over the current proposal to place 40 per cent of assessment responsibilities on teachers, and may enact “long, protracted” industrial actions if the situation doesn’t change.

“I don’t think we should have any more strikes, I think there is the basis for discussion and I would again urge the unions to come back to the table to talk to me,” said Ms O’Sullivan.

She said the four-year rollout of the new Junior Cycle system would remain on course despite recent disruptions.

“ I’m quite happy to talk to teachers about how we’ll implement it, and around issues of resources which I know they have concerns about even though we’ve allocated €9.3 million this year for Junior Certificate reform.

“We’ve just been talking to third year students who are actually working the new Junior Cycle assessment process and who are thoroughly enjoying their learning … That is the reform that students need, and we need to find a way of teachers coming to talk to me at the table around how we can implement that as soon as possible,” she added.