Analysis: ASTI vote is first grenade in what promises to be a long and disruptive battle 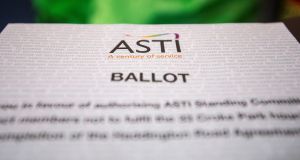 ASTI members voted by a substantial margin to cease working additional hours, in a move which places them in direct conflict with the Government. Photograph: Brenda Fitzsimons

The leadership of the country’s biggest teachers’ union, the Association of Secondary Teachers in Ireland, has been gunning to go to war with the Government following years of cuts and reduced resources.

Yesterday evening the union lobbed the first grenade in what promises to be a long, noisy and disruptive battle.

Members voted by a hefty margin to cease working additional hours, in a move which places them in direct conflict with the Government.

The fact that almost seven out of 10 members voted to withdraw the hours is effectively a two-fingered response to the Department of Education which issued siren warnings about the consequences of such a move.

Teachers had been told that any move to stop working Croke Park hours would trigger a range of penalties contained under financial emergency legislation.

They include losing up to €31,000 over the next four years if they voted to withdraw the hours based on increment freezes, non-inclusion of supervision and substitution payments and the withdrawal of improved pay scales for new entrants.

The union was also warned that members risked losing protection against compulsory redundancy, while temporary teachers would only be considered for permanent posts after four years rather than two.

Government officials had gambled that the warnings would prompt the wider membership to turn its back on the militant path adopted by the union’s leadership.

The union, after all, has been struggling with a disengaged membership given that less than a third of members bothered to vote on its last ballot related to pay and conditions.

If anything it seems the strategy backfired.

The turnout of 76 per cent (it was a school-based ballot rather than a postal one) and convincing margin gives the union a strong mandate to reclaim their terms and conditions.

The fact that the union is now at war with the Government on multiple fronts – junior cycle reform, pay for newly qualified teachers and now Croke Park – does not seem to be a concern for most members.

Some may have gambled that the Government will not press ahead with its threats to cut pay and conditions for ASTI members.

Other are so angered by the Croke Park hours and related issues that they are willing to risk pay cuts and industrial relations chaos.

If the Government follows through with the cuts provided for under the financial emergency legislation it is certain to trigger school closures come the autumn.

The Government is now in a difficult position.

Does it press the nuclear button and trigger cuts to teachers’ pay and conditions?

Or does it try to engage in talks with a union which has shown little appetite for compromise or engagement?

There is no sign that the ASTI has any nuanced strategy save the full restoration of pay and conditions for members. In fact the union opted not to take up an invitation to talks with department officials earlier this month.

One thing seems clear: most members are mad as hell and willing to go to war at any cost.