At the Galway Education Centre, Bernard Kirk’s innovative and fun approach to science and robotics has proven a hit with children 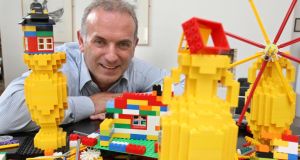 W hen Bernard Kirk was growing up in Cork, he never dreamed a set of Danish interactive plastic bricks in the toybox might become his second name.

To teachers, he’s director of the Galway Education Centre, but to pupils he is more familiar as “Mr Lego”. And “Mr K’nex” and “Mr Space” and myriad other monikers. None of these names quite capture his diverse roles. Last month, he was testing a new “playworks” concept to reduce bullying in school playgrounds, and organising weekend Khan Academy maths sessions for kids. A “standard bearer” for nurturing young people’s interest in science, technology, engineering and maths is how Prof Tom Sherry of NUI Galway described Kirk in a recently conferred honorary MSc citation.

Science wasn’t on the primary curriculum when Kirk trained as a teacher in the early 1980s. But a summer job on building sites in London had a lasting impact. He recalls the middle-aged Irishmen there whose lack of literacy had trapped them in a permanent state of emigration. “These were intelligent men who never had a chance,” he says, and he resolved he would try to ensure the next generation had the skills to cope.

He taught in Clane, Co Kildare, then in Claregalway, Co Galway, and in the early 1990s, he and his wife Treasa took an MSc in educational leadership at Trinity College before they spent time at the University of Minnesota where Kirk became a certified trainer.

The Galway Education Centre is one of 21 facilities funded by the Department of Education for professional teacher development. The then junior minister for science and technology, Noel Treacy, asked Kirk, as its director, if he would help establish a science festival. “ [Treacy] had seen a science event in Scotland and felt it would work well in Galway, where schools could tap into the expertise of the third-level institutions and multinationals in the city,” says Kirk.

The trick was to set up a structure that was independent of both. With £5,000 from the local enterprise board and the same from companies taking stands, the response to the first event at Leisureland in Galway, in 1998, was beyond expectations. “We ran out of tickets, we ran out of everything, but realised there was something.”

Early participants included former art teachers Len McDermid and Dick Warren of Rude Mechanicals, whose mission in life was to draw out the “genius within” by showing how to make devices from simple materials. The Scottish troupe Madlabs also participated. With their soldering irons and masks, Madlabs invited young visitors to make lie-detectors, decision-making machines, flashing badges and programmable robots.

The festival, now at NUIG, is a fortnight-long programme that starts during Science Week, and attracts up to 20,000 people daily. Among return exhibitors this year were Sue McGrath’s burning, bubbling and exploding experiments, and James Soper’s use of David Beckham’s ball path to demonstrate Newton’s laws of motions and Galileo’s parabola principle.

During one science festival, Kirk got interested in the First Lego League. “We went to watch an event in the University of Birmingham. We realised this was not just about putting Lego bricks together,” he says. “Participants were judged on tasks based on robotics and teamwork.” The first contest was held in Galway Education Centre seven years ago. Irish teams had early international successes. St Gerald’s College in Castlebar, Co Mayo, won a British final and competed in Tokyo that first year, and was in the top three at the World Championships in St Louis, Missouri. The tournaments have attracted many girls among the 28 teams from 18 counties, with the Citywise after-school club from Tallaght winning this year’s event and placed in the top three teams abroad.

“That has inspired a whole new group of kids in Tallaght,” Kirk says. “Age is no advantage, as we have had nine year-olds beating transition-years,” he says.

There is now a Junior Lego League, and Kirk has also been involved in establishing Space Camps Ireland, Aviators of the Future and Medtronic K’nex tournaments. He’s investigating the potential of littleBits, the New York-based company that makes Lego-style electronics kits that snap together with magnets.

Kirk has also been involved with Brendan “Speedie” Smith of NUIG’s Digital Enterprise Research Institute (DERI) and others in nurturing the “third literacy” of coding or computer programming, which was the focus of Europe Code Week activities in Galway over the past week.

“Galway is ideal for trying things out in school, then taking it from local to national level with the support of companies, such as those involved in software and in medical devices,” he says. “It’s more than corporate social responsibility for these companies, as many of their chief executives are parents of children in local schools. I get great satisfaction out of hearing how these kids are progressing into science and technology, or whatever their passion might be.”