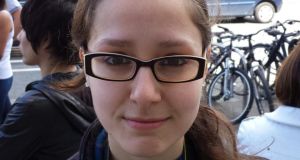 Barbara da Masceno (24) from Brazil was among the language students who took part in a lunchtime protest outside the offices of the Irish Naturalisation and Immigration Service today.

An interdepartmental task force has been set up to manage the fallout from the recent closure of a number of private language colleges.

The task force, which will be jointly chaired by officials from the Departments of Education and Justice, said it had set itself a number of “urgent” goals, including overseeing “a system that seeks to make reasonable accommodation for students” affected by the closures.

The announcement was made by Minister for Education and Skills Ruairí Quinn as hundreds of students met in Dublin to discuss their options, and protest against the Government’s handling of the situation.

Five private colleges have closed in recent weeks after their parent companies were withdrawn from an approved register by the Irish Naturalisation and Immigration Service (INIS). This followed allegations of that attendance records were falsified to disguise the fact that some people on student visas were using them simply to get work here.

The visas entitle people from outside the European Economic Area to work part-time during college term and full-time out of term.

INIS, which operates under the auspices of the Department of Justice, will be represented on the task force along with other stakeholders, including the industry group Marketing English in Ireland, the Irish Council for International Students (ICOS), and regulators Quality and Qualifications Ireland.

The task force has been charged with coordinating efforts to protect learners affected by the closures. It has also been asked to determine the number of students affected, and to assess what capacity available “to make reasonable accommodation for genuine students”.

Sources said it was unlikely to recommend state compensation for lost fees but would rather try to coordinate efforts led by existing colleges which are keen to preserve Ireland’s international reputation in the market.

The task force will meet for the first time on Friday and is expected to complete its work “within weeks”.

Work is also on-going on the introduction of a new International Education Mark and Code of Practice for the sector.

Announcing its establishment of the task force, Mr Quinn said: “We have every sympathy for the genuine students who have been affected by the closure of these private colleges and this Government wants to assist and co-ordinate a sympathetic response to them.”

He said it was “important to note that the students who have been affected are being given grace periods with regard to their immigration status so that they can remain in Ireland, continue to work to support themselves and have the time to plan their next steps”.

A number of students have complained, however, that they have been unable to receive written reassurance of this grace period from INIS which would allow them to continue working here.

Barbara da Masceno (24) from Brazil, who attended a lunchtime protest by students outside INIS’s offices, said her visa had run out and as a result she had to quit her part-time job which was covering her accommodation costs in Dublin.

“I am terrified because I have no options. I am here two years but I cannot renew my visa .”

A student at BCT college in Parnell Square, she said she had paid her fees for the college just days before it was withdrawn from the register. Since then she has been contacting INIS on a daily basis about her situation and had got no reply.“I don’t want to leave the country but we can’t stay here without a visa.”

ICOS said it was aware of a number of students who, like Ms da Masceno, were in “limbo” and unable to get a response from INIS clarifying their immigration status.

However, a spokesman for the Department of Justice said it had already announced a grace period until September 1st for all students and there was “no immediate threat to their immigration status”.

Ms da Masceno, added BCT was a “really good school” and like other students there she hoped it remained open.

A spokesman for BCT said yesterday it feared it would have to close unless it was restored to the register of approved colleges. It has had to let go a number of teachers and amalgamate classes pending the completion of an INIS inquiry into alleged irregularities over enrolments.

BCT has rejected the allegations and has urged INIS to complete its inquiries as quickly as possible so it can resume trading as normal.

In a statement, the Department of Justice said “INIS inquiries are ongoing into all colleges that were suspended from recruiting international students” but it would not be drawn on the timeframe involved in the BCT investigation.

ICOS, which said it had been in contact with close to 1,000 students now affected by the closures, has welcomed the establishment of the task force. But it said urgent action was needed to get visa situations regularised, and to assist hardship cases.