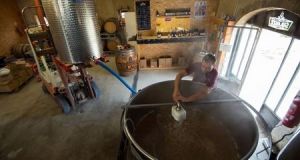 The number of microbreweries in Ireland has exploded in the past five years - growing from 15 in 2012 to over 90 this year. File photograph: Getty Images

Ireland’s first ever degree programme in the art of brewing and distilling will aid an expanding indigenous industry “crying out for graduates”, the course founder said today.

The Bachelor’s degree in Brewing and Distilling, launched today at IT Carlow, aims to support the centuries-old traditions of brewing and distilling, with Irish brewing dating as far back as the Bronze Age and whiskey to the sixth century.

Today, the sector is one of Ireland’s fastest growing industries, with 28 distilleries operating or being developed, while the number of microbreweries has exploded in the past five years - growing from 15 in 2012 to over 90 this year.

The number of microbreweries is predicted to grow by an additional 100 by 2025 and direct employment in distilling expected to rise by 30 per cent.

Despite this spike in growth, the brewing and distilling sector is experiencing a national skills deficit, with the course at IT Carlow a direct response to this, according to programme director David Ryan.

“Our honours degree and associated professional development programmes have been developed in response to a clear sectoral need and will support both the ongoing renaissance in craft brewing and distilling in Ireland and the industry’s global ambitions,” he said.

Bachelor’s students will gain a solid foundation in science before moving on to learn the skills of brewing and distilling and gaining industry work experience over the four years of the degree.

The continuous professional development programmes will fill a “massive gap here”, according to Dr Ryan, as breweries currently have to send their staff to Heriot-Watt University’s International Centre for Brewing and Distilling in Edinburgh for training.

“The Irish industry is booming and growing and is crying out for graduates. I’m yet to pick up the phone and speak to someone from the industry who has not been interested,” Dr Ryan said, consulting with the likes of the Irish Brewers Association, Walsh Whiskey, Alltech and Teagasc over the past two years.

Speaking at the launch, IT Carlow president Dr Patricia Mulcahy stressed the dual role of the course in providing students with the skills to go out into the workplace while “simultaneously supporting and driving the development of a vibrant economy”.

The launch was also attended by some of Ireland’s foremost food and drink experts, including food writer John McKenna, who praised craft brewing and distilling as the “two most exciting and dynamic sectors in Ireland’s food and drink culture”.

“In almost 30 years of writing about speciality food and drink in Ireland, I have never witnessed anything like the energy and creativity that we see today amongst the brewers and distillers.

“Personally, I only wish that the course had existed 40 years ago when I went to college.”